SARATOGA SPRINGS, N.Y. (Sept. 23, 2020) – The Saratoga Automobile Museum has announced that the Saratoga Motorcar Auction, sold $3.7 million in vehicles and automobile memorabilia. The Auction took place on the grounds of the Saratoga Spa State Park on Saturday, Sept. 19.
“The Saratoga Motorcar Auction remains a tremendous undertaking and its success could not have been realized without the incredible partners and sponsors that the Museum has been able to attract,” said Kevin Biebel, Chairman of the Museum’s Board of Trustees. “Bravo to the entire staff and team of volunteers at the Saratoga Automobile Museum for putting together another world-class auction. In just four short years, this annual event has become a major attraction for car collectors and automotive enthusiasts alike.”
The Auction serves as the Museum’s major annual fundraiser. Proceeds from the Auction supports the Museum’s Safe Driving Initiatives, including the Distracted Driving Safety Program, a program that reaches nearly 25,000 students annually. Auction proceeds also support the Museum’s evolving exhibition programming.
“This year’s Auction further solidified the Saratoga Motorcar Auction’s standing among the national auction houses,” said Bill Windham, auction director. “The increased quality of consignments and the volume of online and phone bidders this year was incredible.”

Total sales were $3.7 million. The sell-through rate for the Auction was 70 percent, a substantial increase year-over-year, despite the fact that this year’s Auction was reduced in scope and length due to COVID-19 restrictions.

With NYS safety protocols enacted, which included closing the event to spectators, the Auction pulled in over 11,000 online spectators to watch the day-long event.
“The success of this Auction, in the midst of a global pandemic, is a massive win for the future of the Museum’s initiatives,” said Carly Connors, executive director. “I cannot thank our staff, volunteers, consignors and bidders enough for following all NYS and CDC safety guidelines to make our event successful and safe.”
Top sellers at the Auction included:
1958 Plymouth Fury “Christine” movie car: $275,000
2011 Porsche 911 Speedster: $239,000
1970 Porsche 914/6: $137,500
1959 Chevrolet Impala: $115,500
1931 Pierce Arrow Model 42 Phaeton: $82,500 (all proceeds benefiting the Saratoga Automobile Museum)
The 2021 Saratoga Motorcar Auction will take place on Sept. 24 and 25, 2021 on the grounds of the Saratoga Spa State Park.
To consign a vehicle for the 2021 Auction, contact Bill Windham at (518) 587-1935 or by email at bill.windham@saratogaautomuseum.org.

SARATOGA SPRINGS, N.Y. (July 24, 2020) –The Saratoga Automobile Museum is proud to announce Abby Ingraham has been hired as the new Director of Development.

Ingraham’s background and diverse experience in account management and building partnerships nationwide, is anticipated to strengthen and expand current Museum fundraising and sponsorships. In addition, Ingraham will be responsible for overseeing the Museum’s growing membership base.

“We are ecstatic to add Abby to the team here at the Saratoga Automobile Museum,” said Carly Connors, executive director. “Her understanding of what the Museum can offer our members and community partners will help expand our fundraising efforts and provide the necessary funding to enhance our exhibit and educational offerings.”

Ingraham, a Capital Region native, attended The College of Saint Rose in Albany, N.Y. and holds a B.A. in Public Communications. She has worked for non-profit associations over the past decade. Ingraham’s most recent position was with the Northeastern Retail Lumber Association in East Greenbush, N.Y. as Director of Associate Memberships and Partnerships. Prior to her role with the Northeastern Retail Lumber Association, Ingraham was a Senior Account Executive for ISSA – The Worldwide Cleaning Industry Association, located in Albany, N.Y. and Chicago, I.L.

For more information about the Saratoga Automobile Museum, how to become a member or a corporate sponsor, please visit saratogaautomuseum.org.

SARATOGA SPRINGS, N.Y. (July 6, 2020) — The Saratoga Automobile Museum has announced that it will host a drive-in consignment day at the Museum on Saturday, July 11 to promote the upcoming fourth annual Saratoga Motorcar Auction taking place this September.

“Our drive-in consignment day is a great opportunity for prospective consignors to go through the consignment process in-person with our amazing team,” said Bill Windham, auction director of the Saratoga Motorcar Auction.

Appointments for the drive-in consignment day are not required but are encouraged by either e-mailing bill.windham@saratogaautomuseum.org or by calling (518) 401-5180.

Additional dates are as follows:

The Saratoga Motorcar Auction, now in its fourth year, will take place Friday, Sept. 18 and Saturday, Sept. 19 on the stage of the Saratoga Performing Arts Center. In the auction’s third year, nearly 300 vehicles were part of the event. This year, the auction will feature incredible rare and classic vehicles and automobilia. The Auction is the largest annual fundraiser for the Museum’s exhibit and educational programs.

Per New York State and CDC guidelines, face masks and social distancing will be followed and required to ensure the safety of our attendees, staff and volunteers.

SARATOGA SPRINGS, N.Y. (May 14, 2020) – The Saratoga Automobile Museum is excited to announce its newest consignment for the 2020 Saratoga Motorcar Auction; the 1968 Thompson/Yenko IMSA Corvette.

Call it a barn find, time capsule or race-ready piece of American produced race car history, there is no question this one-off Corvette is the most documented vintage race car being offered in some time. With just one owner since the purchase from Jerry Thompson and Don Yenko in 1975, the same year of its participation in the 24 hours of Daytona. This race car is the second factory-built racing Corvette for Jerry Thompson and Don Yenko.

This Corvette has been returned to its original, as raced, condition. The car is a complete, fresh restoration with an emphasis on originality and authenticity. This car was raced in the 24 hours of Daytona where it raced against the likes of Peter Gregg, Brian Redman, and Al Holbert in their factory Porsches and BMWs. The Corvette now stands as it rolled off the trailer in 1975, with meticulous detail paid to the preparation on that day.

Jerry Thompson, a noted Corvette racer from the early 1960s and driver of the famous Owens-Corning Corvettes of the late 1960s as well as Don Yenko, the legendary Chevrolet dealer of high-performance street cars, combined on the project to build this “skunk works” version of the racing model. Thompson, a General Motors engineer, and Yenko, who supplied the motors through his high-performance connections at GM, constructed the car with the help of the GM tech center in Detroit.

“We are honored to have this racing legend heading to the Saratoga Motorcar Auction in September” said Bill Windham, auction director. “The consignment of this Corvette shows the level of vehicles that we are able to bring in as we enter our fourth year and helps generate interest and buzz about our event and showcases our level of commitment to all types and levels of classic vehicles.”

The car boasts a freshened 454 cubic inch engine, bored 60 over to produce over 650 horsepower. The engines came directly from Chevrolet’s performance department and tested on the dyno at the factory. The Corvette meets the exact specifications for which it ran in Daytona in 1975.

The documentation provided by the owner is comprehensive. Included with the Corvette is the original bill of sale from Jerry Thompson, all racing results and historical documents relating to its entry and participation in numerous IMSA sanctioned events throughout the United States, a notarized statement from Thompson as to the authenticity and history of the car, as well as numerous photographs of the car in its various racing liveries throughout its lifespan.

Questions about this Corvette, the 2020 auction, or current consignments can be made by calling Bill Windham at (518) 401-5180, or by emailing bill.windham@saratogaautomuseum.org.

The 2020 Saratoga Motorcar Auction is taking place Friday, Sept. 18 and Saturday, Sept. 19 at the Saratoga Performing Arts Center in Saratoga Springs, N.Y. The auction will have more than 300 vehicles available for bid. There will be opportunities to bid in person, online, over the phone, or via proxy.

The Saratoga Motorcar Auction is the largest fundraiser presented by, and in support of, the Saratoga Automobile Museum, a 501(c) 3 not-for-profit institution. 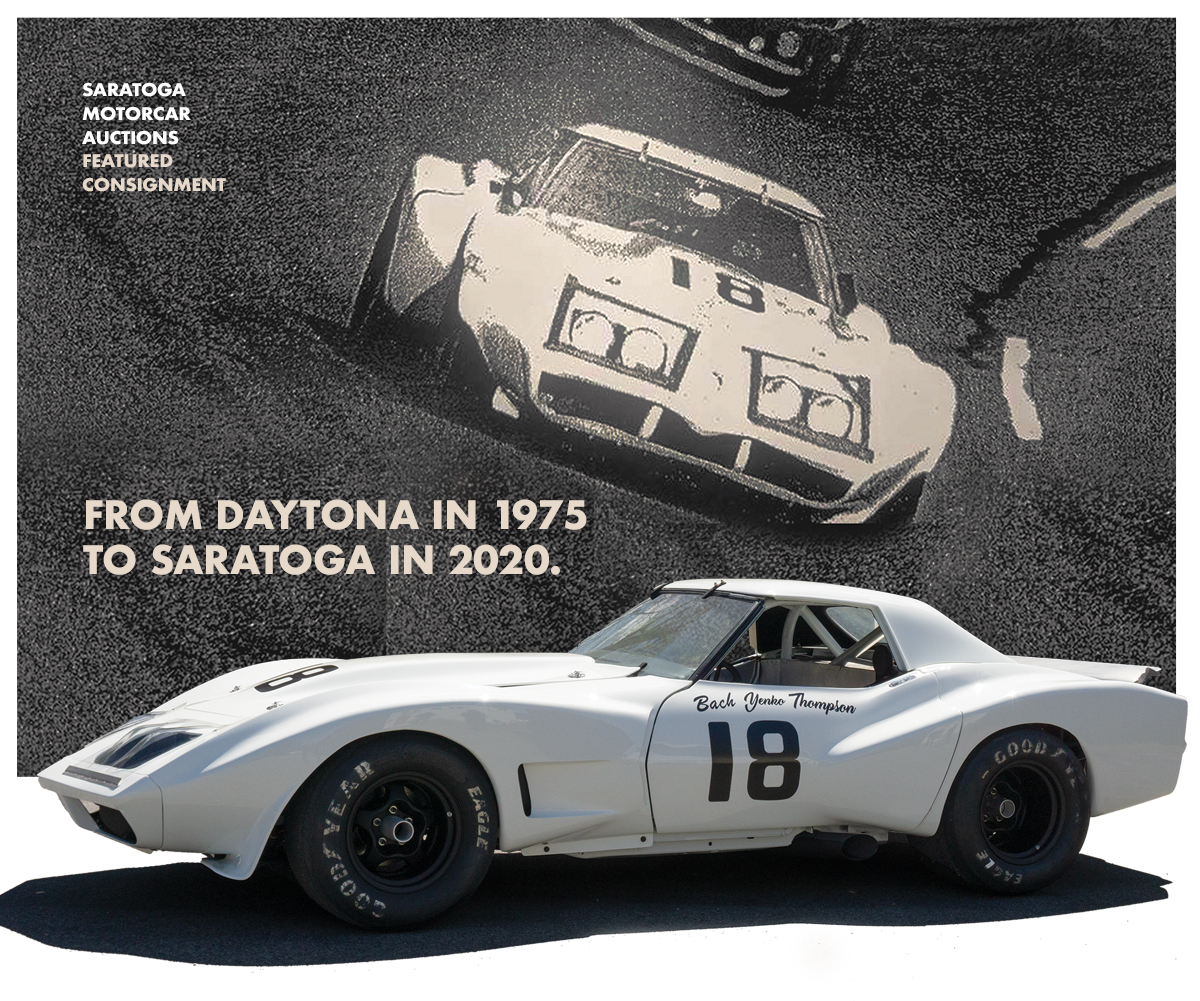