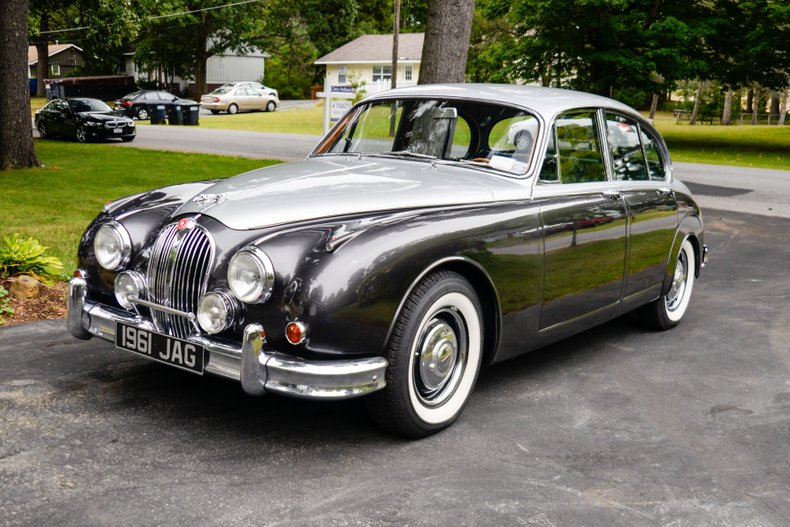 The Jaguar MK II sedan is considered one of the most elegant cars produced by Jaguar, a company famous for its beautiful sports cars. Even though it is a four-door sedan the MK II delivers sports car like performance from the famous XK DOHC straight six at 3.4 liters.

The Mark II (also known at the Mk 2) was an update to the company's first small unibody saloon and was an instant hit with larger windows and a wider rear track, new grill, fitted fog lamps and standard 4 wheel disc brakes. The brakes on this car have been completely rebuilt using new parts according to the owner.

This MK II received an extensive restoration two years ago. The XK engine in this car was completely rebuilt and has only some 250 miles since. It has a new exhaust manifold and the owner has installed a stainless steel exhaust system. He also replaced the shocks and springs so the car handles as a Jaguar should.

The inline 3.4 liter six is feed by two SU carburetors and the transmission is the highly desirable floor mounted four speed with overdrive. In its day the 3.4 liter engine produced 210 h.p. and a top speed of well over 100 m.p.h.

The two-tone grey paint on this particular MK II perfectly compliments the sweeping lines of the MK II. The grill and front of the car closely resembles that of its sports car cousin the XK150.

The interior is beautiful as well with a walnut veneer dash, multiple gauges in front of the driver, a row of toggle switches in easy reach and comfortable bucket leather seats, blue in this car. The back seat features drop down wood trays and a leather armrest in the middle of the bench seat.

This car has been meticulously restored and maintained by an owner who takes real pride in his work, even the underside is spotless.

This is an opportunity to own a beautiful MK II, the most successful classic Jaguar sedan ever created.