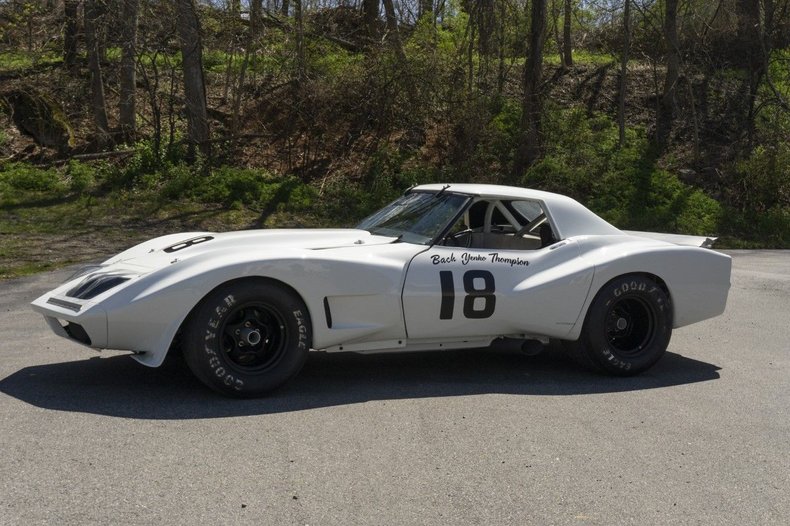 Call it a barn find, time capsule or race ready piece of American produced race car history, there is no question this one off Corvette is the most documented vintage race car being offered in some time. With just one owner since the purchase from Jerry Thompson and Don Yenko in 1976, the year after its participation in the 24 hours of Daytona where it ran as high as third against the likes of Peter Gregg, Brian Redman, and Al Holbert in their factory Porsches and BMWs. The Corvette now stands as it rolled off the trailer in 1975, with meticulous detail paid to the preparation on that day.

Jerry Thompson, a noted Corvette racer from the early 1960s and driver of the famous Owens-Corning Corvettes of the late 1960s as well as Don Yenko, the legendary Chevrolet dealer of high-performance street cars, combined on the project to build this “skunk works” version of the racing model. Thompson, a General Motors engineer and Yenko, who supplied the motors through his high-performance connections at GM, constructed the car with the help of the GM tech center in Detroit.

With the assistance of GM design engineer, Randy Wittine, who created the unique “boxed” flares to accommodate the newly approved wider tires, the Corvette provide a silhouette never seen in a production racing Corvettes. Wittine's flares were the second set produced, as the first set went to the factory supported John Greenwood IMSA Corvette.

Power was supplied by a 454 cubic inch engine bored 60 over to produce over 650 horsepower. The engines came directly from Chevrolet's performance department and dyno'd at the factory. The Corvette now has an all new 454 bored and prepared to the exact specifications for which it ran in Daytona in 1974.

The documentation provided by the owner is comprehensive. Included with the car are the original bill of sale from Jerry Thompson, all racing results and historical documents relating to its entry and participation in numerous IMSA sanctioned events throughout the US, a notarized statement from Thompson as to the authenticity and history of the car, as well as numerous photographs of the car in its various racing liveries throughout its lifespan.

Offered for sale for the first time since its purchase in 1975, the Corvette is now prepared to pristine condition and attention to detail. The car's historic value, given its factory participation and association with legends Jerry Thompson and Don Yenko, make this Corvette a serious piece of American produced racing car history. Other than the famous Cunningham Corvettes of the late 1950s, the Grand Sports of the early 1960s and the Greenwood cars of the 1970s, this Corvette is a one of one in the registry of legendary racing Corvettes.