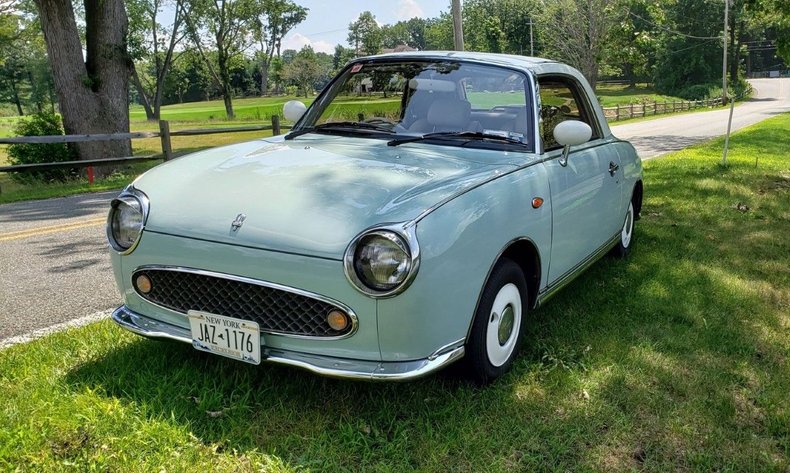 HISTORY OF THE NISSAN FIGARO
The Nissan Figaro is a front-engine, front-wheel drive, two-door, 2+2, fixed-profile convertible manufactured by Nissan for model year 1991, and marketed in Japan at Nissan Cherry Stores.
A total of 20,073 Figaros were produced by Nissan in the convertible's single year of series production — all with right hand drive.
As a fixed-profile convertible, the upper side elements of the Figaro's bodywork remain fixed, while its fabric soft top retracts in conjunction with a solid panel with a defroster-equipped glass rear window — as seen in other notable fixed-profile convertibles, including the Vespa 400 (1957), Citroën 2CV (1948–1990), the Nash Rambler Convertible "Landau" Coupe (1950), and the 1957 Fiat 500 — as well its 2007 Fiat 500 successor.
With its design variously attributed to Naoki Sakai and/or Shoji Takahashi, the design strongly recalls the Gutbrod Superior, a German fixed-profile convertible marketed from 1950-1954.
Because of its origins at Pike Factory, Nissan's special project group, the Figaro (along with the Nissan Pao, Be-1 and S-Cargo) are known as Nissan's "Pike cars," and represented a design strategy that adapted "design and marketing strategies from other industries like personal electronics."
In 2011, noted design critic Phil Patton, writing for the New York Times, called the Pike cars "the height of postmodernism" and "unabashedly retro, promiscuously combining elements of the Citroën 2CV, Renault 4, Mini, and Fiat 500".

This is an non restored original car, that has been maintained (as noted by the factory bolt markings and decals in the engine bay). Additional items refurbished and/or replaced include a new AGM battery, window motor and regulator.