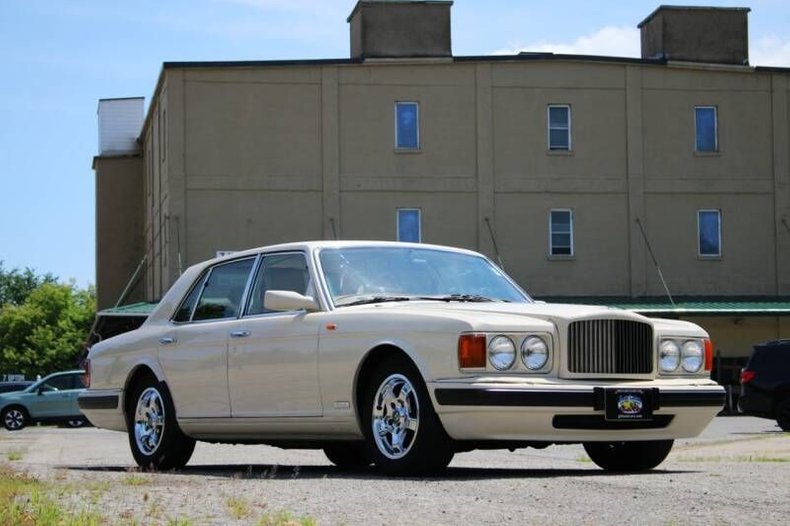 1997 Bentley Brooklands - Trophy
This 1997 Bentley was originally owned by the Piano Man himself Billy Joel!
Ordered new as one of 28 Trophy Editions built exclusively for the US Market.

Beautiful car and so,,, iconicThe 1997 Brooklands Trophy Edition was built to commemorate the 75th Anniversary of the Team Bentley domination in the 1922 Tourist Trophy (TT) Races in which they won the Team Prize.

The Brooklands Trophy Edition features the extraordinary light pressure turbo Bentley 6.75L engine. This model carries many of the Turbo R's distinctive features: color keyed radiator grill vanes, two tone color seating hides, more extensive wood veneer, and chrome five spoke wheels with Avon tires.
The Bentley Brooklands fit perfectly the badge-engineered mold that had come to define so many Bentley products, as it was a purportedly sporting version of a basic design that had already been in use by Rolls-Royce/Bentley for over a decade. The platform on which the Brooklands was based made its debut for 1980, as the basis for the Rolls-Royce Silver Spirit (or long-wheelbase Silver Spur) and Bentley Mulsanne. By the time the Brooklands was introduced in 1992 its platform was dated for such a high-end machine, making the Brooklands more endearingly quaint than impressively competitive.

The Brooklands was named after one of early motor racing's most famous tracks, a site where Bentley had proven itself a supremely capable marque in the years before its affiliation with Rolls-Royce. Recalling the Brooklands name on a car that, badging aside, had no connection to prewar racing Bentley's was perhaps a marketing gimmick, but it was nevertheless an evocative name that paid tribute to Bentley's triumphant early years.
Mechanically, the Bentley Brooklands had much in common with the other Rolls-Royce/Bentley models that used its platform. The familiar V8, an all-alloy design displacing 6.75 liters, was employed. The engine featured wet, cast-iron cylinder liners and Bosch fuel injection and ignition control. Four-wheel disc brakes and all-independent suspension were used to give the 2-and-a-half-ton Bentley manageable driving characteristics. The suspension was self-leveling, and featured an automatic ride control system.
The interior and exterior of the Brooklands, with their now-familiar forms, were traditionally opulent. A large, vertically veined grilled with quad headlights gave the big Bentley a menacing face, though its elegant proportions announced the car's unwillingness to behave brashly. Inside, leather and wood were used to cover nearly every visible surface. A full complement of neatly inset gauges and an automatic transmission shift lever located in the center console (instead of on the steering column) suggested the Bentley's supposed driver's car mentality.

There were relatively many Rolls-Royce's and Bentley's on the road with the same basic look as the Brooklands, since the body design had been used on so many different models. The Brooklands itself was quite exclusive, though, with just 1,380 produced including 172 long-wheelbase models.
Number manufactured 28 Total Trophy Editions Only but ONLY ONE OF THESE WAS BILLY JOEL'S.