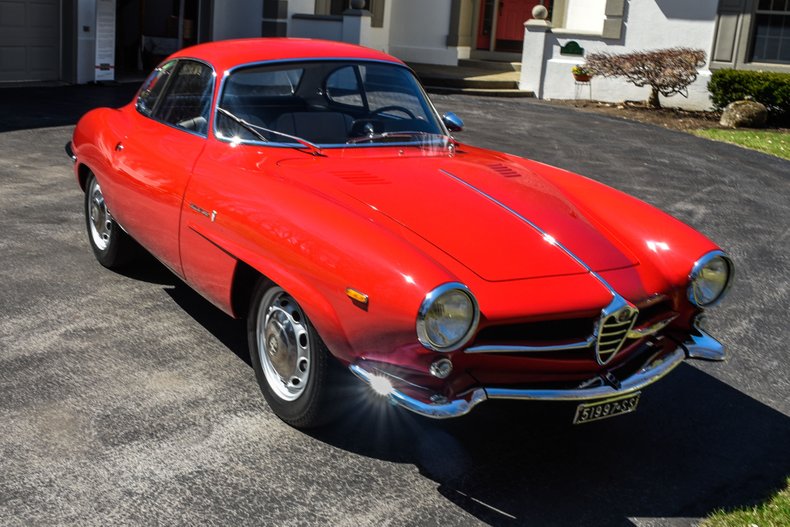 Produced from 1959-1966, the Alfa Romeo Giulia Sprint Speciale was designed by Franco Scalione for the famous Bertone design studio and coachbuilder. With design cues taken from the B.A.T concept cars, also designed by Scaglione. The SS was one of Alfa Romeo's most radical designs ever constructed. First shown in 1957, in its Giulietta form at the Turin Motor Show, the SS went into production for the model year 1959.

Presented is a one the 1366 Giulia Sprint Speciales. Beautifully restored to near Concours condition, this example was built on February 1, 1964 and sold on June 20 in Venice Lido. There have been 5 owners since new according to Centro Documentazione Alfa Romeo (FGA) and historian Mario Fazio. Purchased by the current owner from a well respected and known name in the Italian automotive industry, the current owner commissioned the highly acclaimed Carrozzeria Viscardi in Varese VA, Italy to conduct a full restoration. Finished in its original RED 501 exterior, the interior was done its its correct original black vinyl and off white cloth seating. Upon completion, it proceeded to Techno Classica Essen, where it was placed on the Viscardi display stand where it won many awards. In addition to the cosmetic restoration, the engine and drivetrain were rebuilt to the highest standard.

While in the United States, the current owner has won many prestigious awards. it is also recognized by the Automotoclub Storico Italiano as Certificato #6401 which accompanies the car. Restoration and repair documentation is also included. The SS represents a rare opportunity to own a turn-key concours quality Alfa Romeo Giulia Sprint Speciale with outstanding provenance, documentation and history.