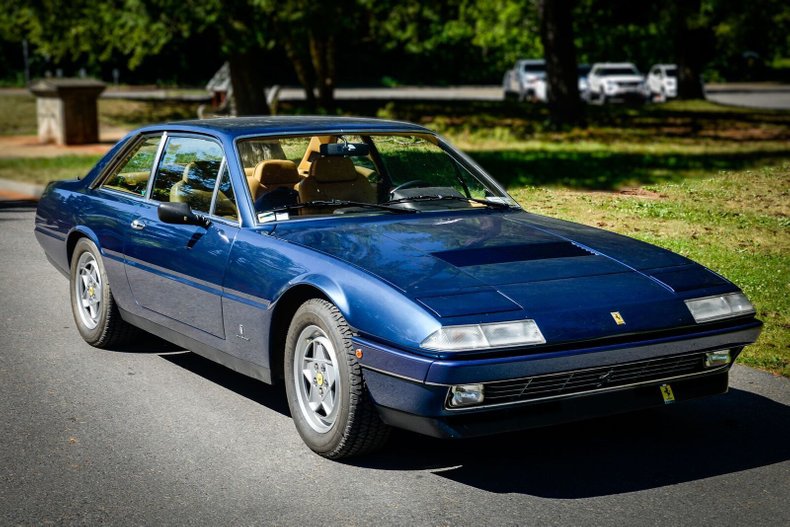 One of the most beautiful of Ferrari's Pininfarina-styled grand touring 2+2s, the 412 represents the final evolutionary advancement of Ferrari's GT class from the 365 of 1972. In fact this model was the last Ferrari produced with the legendary Colombo designed 60-degree V12. With it's spacious interior and big 4.9 liter V12 Ferrari engine this car was built for high speed touring in comfort.

The 412 is a rare model with only some 576 cars built during a 4-year run and they were not imported into the United States so they are even rarer in this country. In fact a Countess in Switzerland originally purchased this car. The current owner bought this car from the Vice President of the Ferrari Club of France so the provenance and service history of this particular Ferrari 412 is well known and documented.

The owner says the car comes with service records and Auvergne Motors of Clermont-Ferrand did the last full service in March 2017, which included a front suspension rebuild with new bushings. It has new fuel pumps and the leather dash has been replaced. It also has 4 new Michelin TRX tires.

This 412 has the three speed automatic transmission found on only 306 412s. The 412'a 4.9-liter V12 put out 340 h.p. with the fuel injected engine. This was the first Ferrari to feature anti-lock brakes and this car has power steering.

The paint is original in Blue Sera Met and in good condition while the interior of this 2-door 2+2 is beautiful in beige leather.

Bidders should also be aware that the owner says he has the original Ferrari tool sets and all the original manuals in their leather envelopes.

This is an opportunity to own a classic and rare Ferrari 412 2+2 with clear provenance that has in the words of the owner, “been optimally maintained throughout its 35 year life.”