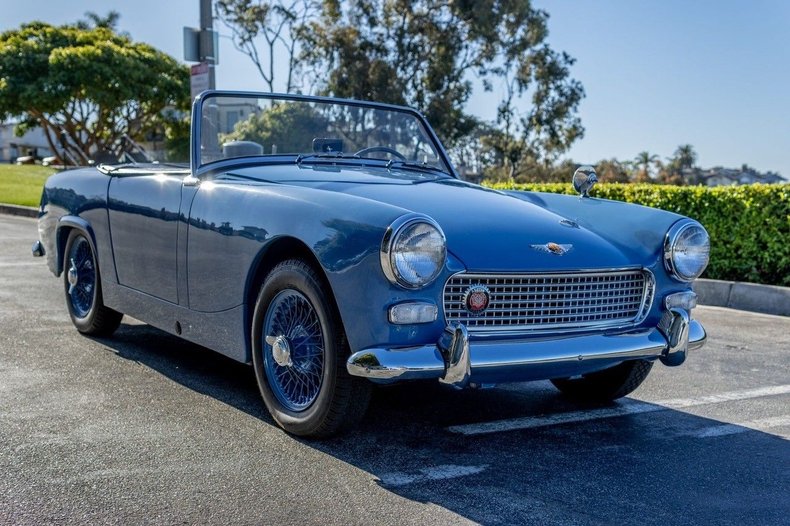 This 1964 Austin-Healey Sprite is a MK II example powered by a replacement 1,275cc inline-four paired with a four-speed manual transmission and finished in blue over a dark blue interior. Features include a replacement dark blue Hartz cloth top, 13″ painted wire wheels, twin SU carburetors, chrome bumpers with overriders, and a heater. Work performed in 2020 included replacing the generator, regulator, master cylinder, interior trim, and tires. This Sprite is offered with a full tonneau cover, side curtains, refurbishment records, and an owner's manual.

The car underwent a refurbishment during previous ownership, which reportedly included rust repair, floor replacement, body work, and a repaint in its current shade of blue. A replacement dark blue Hartz cloth top was installed along with a replacement powder coated top frame. Additional equipment includes chrome bumpers with overriders and a driver's side mirror.

Wire-spoke 13″ wheels have been painted to match the body and are equipped with polished knock-off hubs and 145-series Pirelli tires showing 2018 date codes. A matching spare with a 155/80 Westlake tire is stored in the trunk. Braking is handled by front discs and rear drums, and the clutch and master cylinder unit was replaced.

The interior features bucket seats upholstered in dark blue vinyl along with matching door panels, carpets, and a leather dash. Lap belts have been added for both occupants, and additional amenities include a carpeted rear parcel shelf, a heater, and a chrome passenger grab handle.

A two-spoke steering wheel frames a Smiths tachometer, a 100-mph Jaeger speedometer, a fuel level gauge, and a combination gauge for oil pressure and coolant temperature. The five-digit odometer shows under 63k miles, approximately 3k miles of which were added during current ownership, though total mileage is unknown. The speedometer is non-functional but the odometer remains operational.