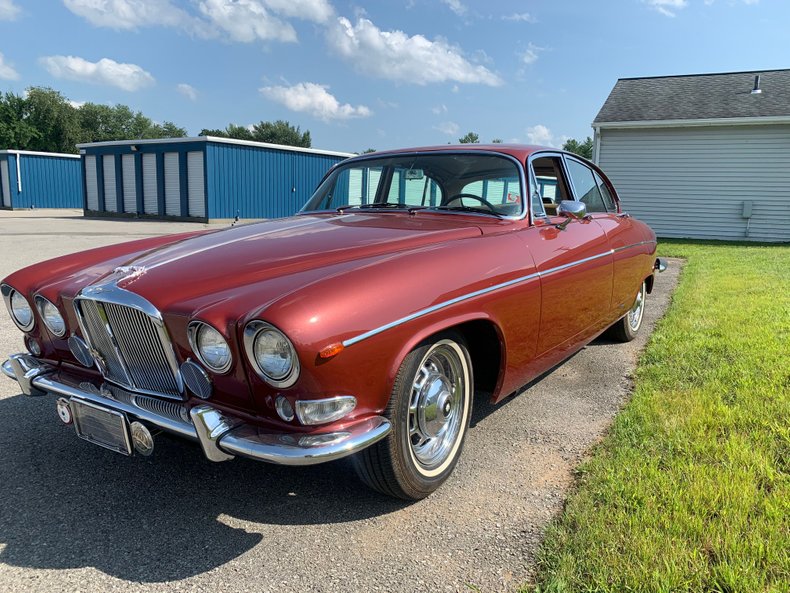 Mechanically, the Jaguar saloon shared much with its newly introduced stablemate, the E-Type. Under the hood was the DOHC six-cylinder that first appeared in the 1949 XK120, now upgraded to 265-horsepower, thanks to 3.8 liters of displacement, triple carburetors, and a straight-port cylinder head. In power-to-weight terms, then, the Mk X stacked up well--even exceeding the 1960 Lincoln, despite its 430-cu.in. V-8 powerplant.

In 1967, Jaguar re-crafted the MK X into the 420G with minor trim and interior differences. The new name was a direct answer to Mercedes's three-digit nomenclature with "G" appended for "Grand" to differentiate the flagship Jaguar from its smaller 420 Sports Saloon sibling, derived from the S-Type. The changes and name switch failed to revive interest in the aging design, however, and Jaguar managed to move only another 5,763 units before production was discontinued in 1970.

With the 420G, luxury features were in abundance as well. In addition to the automatic transmission, power steering was made standard. The Connolly leather seats reclined in front and both front and back seats offered folding central arm rests.

The price for the 420G was a sensible $7,384. It even attracted the attention of one Richard "Red" Skelton, who purchased this 1967 420G directly from the factory and had it refinished in a custom shade of maroon dubbed "Skelton Red" from its original opalescent Desert Tan hue.

Restoration of this special 420G to a street-and-show example included numerous invisible upgrades: stainless exhaust, 15-inch wheels and radial tires from a Series II XJ6, external mirrors from the same car and an upgraded audio system. The car was professionally stripped and repainted in 2009 at a cost of $18,000. It is worth noting that the 14-inch wheels, hub caps, the original radio with its wood faceplate come with car. The 420G remains as one of the best-kept secrets in the Jaguar community as either a luxury driver or sleeper show car.

The first owner was television and comedy legend Richard “Red” Skelton. Purchased in Cathedral City, California on September 13, 1966. This special vehicle comes with the Jaguar Daimler Heritage Trust Production Record Trace certificate #28522.
Car resided in California until 2007 and comes with all documentation of past maintenance from all three previous owners.