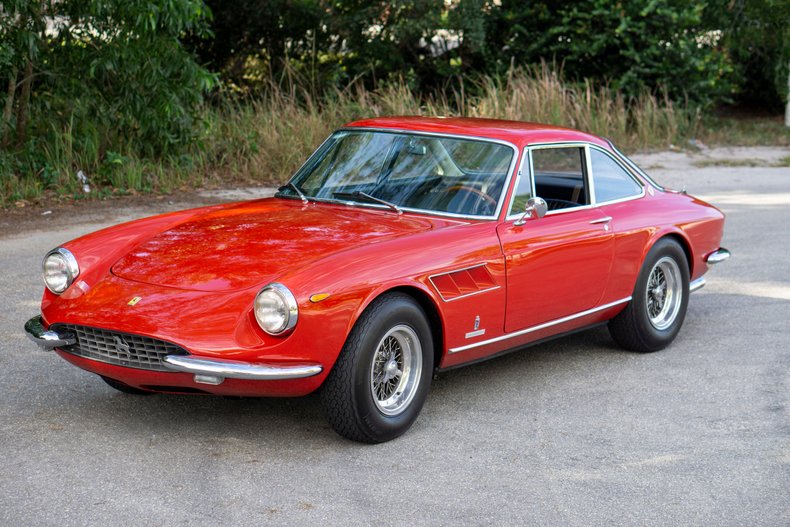 The 330 GTC is recognized as one of the best looking and driving Ferraris of the Enzo era. They are also rapidly appreciating with the last 3 sold on BAT bringing $598,000, $635,000 and$715,000. The combination of the muscular Columbo four litre V12, gated stick shift, rear mounted five speed synchro gearbox, disc brakes and independent suspension deliver the classic Ferrari essence. The Pininfarina bodywork is extremely good looking with influences of the 275GTS and the 400 SuperAmerica. Just 600 were built from 1966 to 1968

This car is a numbers matching example delivered new to Commendatore Pietro Ferraro, Italian business magnate and sportsman in Triest. It was imported to California in 1972 and its history since it left the factory is documented in the available Massini report which comes with the car. It was originally Grigio Fumo (smoke gray) with tan interior and factory air conditioning(no longer with the car but replaceable). The current owner acquired this car in its current red/black configuration 25 years ago with 23,487 miles, it now has 27,685 miles which appears correct based on the Massini report.

Two years after purchase the transaxle was fine but the third gear synchros became noisy so it was totally rebuilt by John Hajduk's Motorcraft Ltd (3,500 miles ago.) The engine was strong and did not overheat in the Atlanta summers but it had one low cylinder so it was completely rebuilt by Rick Charles, formerly of John Appen's FAF and Teddy Rutlands in Atlanta, in 2011-2012. Over 90 color photos and 14 pages, document the comprehensive engine work. The Weber carbs were rebuilt by Pierce Manifolds of Gilroy, Ca. Since 2017, when the owner moved to Naples, the car has been maintained and improved exclusively by Eric Krukow at F1 in Naples. A detailed book of photos and 44 pages of receipts detailing the extensive work done since 1997 come with the car. The result is a very well sorted car, as other 330 GTC owners who have driven it will attest. Cool running and no exhaust smoke. That saves the new owner time and money, thus immediate enjoyment.

The chrome is acceptable but not show. Exterior paint is presentable with some small areas that have lifted along the beltline. The original color, Grigio Fumo is very desirable and would be a good choice if the new owner decides on fresh paint. The major expense of a fresh drive train done by Ferrari V 12 specialists is done. As an owner of many vintage cars, that is the hard (read expensive) part. The current owner is downsizing his collection due to age and seeking a new owner who will drive and enjoy this well sorted 330 GTC.

Owning and driving a reliable, tight Enzo era V12 Ferrari is the pinnacle for the true car hobbyist. The 330 GTC is often cited by connoisseurs as the best road going Ferrari and it ranks equally high in the looks category. It is more akin to putting a thoroughbred race horse through its paces than merely driving a car. The sounds, power, handling, and elegant design make it a must for any car persons bucket list. There is simply nothing quite like it.