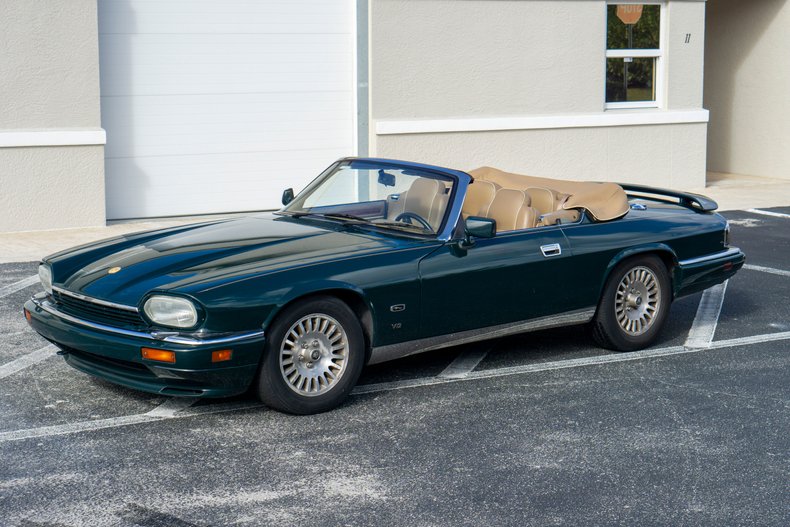 This rare Jaguar XJS V12 convertible is one of 78 imported to the U.S. and one of 89 produced worldwide documented by Mike Cook, Jaguar North America archivist. It is Brooklands Green with tan interior and top. Carfax reports that it was sold new in Atlanta and has had just three owners. The current owner took possession in 2004 at 63,000 miles. Over the past 18 years it has averaged 2,300 miles per year.

The massive 6 litre V12 is paired with a four speed automatic transmission. Ford bought Jaguar in the early nineties and greatly improved the quality and reliability of the XJS over the next four years. 1995 was the last year of the top of the line XJS V12 cars and the Ford refinements make it a joy to drive with smooth, rapid acceleration, superb handling and a top speed 161 mph.

After a few years in Atlanta this Jag was used as a fun car at the owners vacation homes in Bedford, New York and Naples. It has been well maintained since new with receipts available since 2004 and a clean Carfax. This 27 year old car is entirely original. Bodywise, the clear coat on the hood has begun to deteriorate. It would be stunning with the repair of minor dings and fresh paint. The special V12 wheels also need refinishing. The chrome, interior and convertible top are very good. The top works perfectly.

Mechanically, it doesn't smoke or use oil, never overheats (even in the Naples summer with A/C on) and runs strong. The transmission shifts like a new car, the suspension and steering are tight and all accessories work. The A/C blows cold. The ABS light comes on from time to time which I am told means a new sensor is required. Proof that this is a genuine British car is evident by a few oil leaks under the car.

This is the last of The Big Cats. It is a luxurious yet sporty convertible that is fun to drive. For investment purposes, it is the right color combination, the last and best year with all of the Ford improvements and documented one of 78 making it extremely rare. XJS values are rising and the low production, final year V12 will continue to bring a premium.