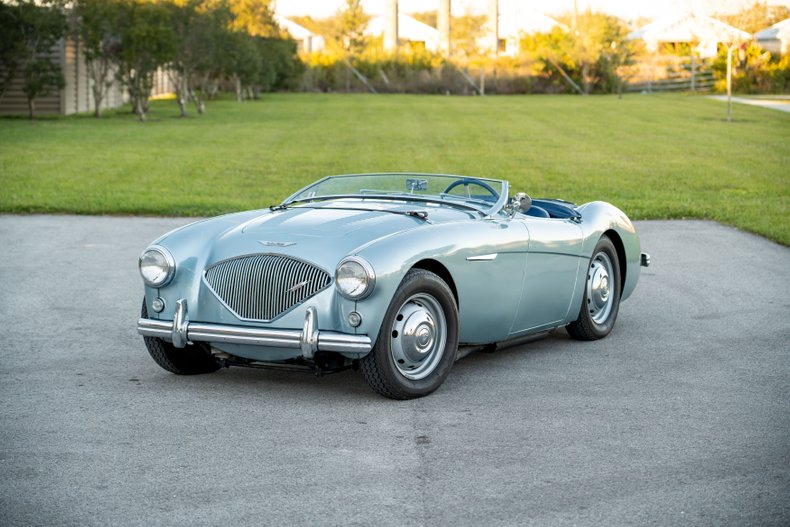 The story starts with a call from Bob Manhart in Ft. Meyers in December 2013- he had purchased a Basket case Healey 100 and asked me if I would help him restore the car. I said I would, that I was an expert on Healey 100's, served on several Concourse Judging Teams, and had a very original 100 that I had owned for 45 years that could be used as reference. I was happy to be a resource to guide the restoration.

I found that Bob had restored several cars and was a good craftsman. The car was rotisserie restored and the engine rebuilt, with input from me as to what would be correct, and what updates would be appropriate for the car, based on my experience.

The Exterior and interior Colors are as originally built-Healey Blue Paint and Blue Interior and Top as described on the BMIHT Factory Build Record.

The restoration took 3 years and all parts were replaced or refreshed, including a new correct wiring harness and rebuilt instruments. The car was originally built with wire wheels and in 2017 the wheels were converted to disc wheels. I advised and monitored progress by multiple visits during the restoration.

This Healey 100 with Le Mans kit was featured in a video with Gerry Coker-Stylist of the car, and signed by Gerry Coker in 2017. The video was made by Bill Meade (founder of the Austin Healey Lemans Registry) and shown at a large West Coast Austin Healey event.

I purchased the car in March 2020 and put approximately 1000 miles on the car.

This Austin Healey 100 has many desirable features and options included.

Note that the original parts are supplied with the car including the Front Drum Brakes, Wire Wheel Spindles, and Overdrive unit.

Disclosure- The Car had been hit on the right hand side prior to the rebuild and the frame was professionally straightened to original specification. The car tracks perfectly.