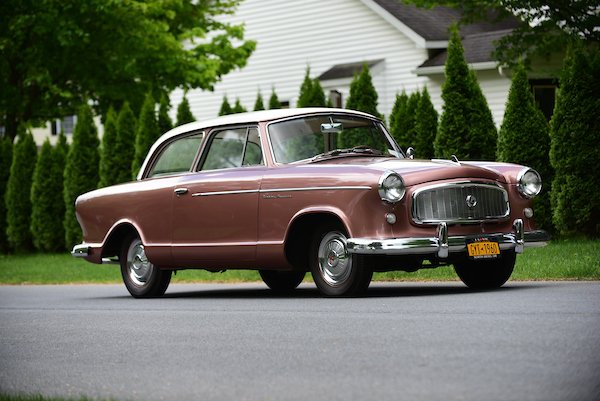 A Rare Find. The extremely charming 2-door sedan with the uniquely attractive Cinnamon Bronze and Frost White color combination may be the only one in existence. This car is one of the rarest in the country. Very few of the 2,994 produced still exist. It is a "numbers matching" car, nearly all original, with only 44,670 miles. It comes with the original owner's manual. The dash, garnish moldings and steering wheel are also in Cinnamon Bronze. The seats, headliner, door panels are upholstered in coordinating lavender and white, cloth and vinyl materials thought to be original to the car. Carpeting has been replaced with white cut pile.

Fun to Drive. The original in-line six cylinder 196 cid, OHV engine and the manual 3-speed transmission provide unexpected "get up and go" and comfortably cruises at 65mph. The engine, accessories and engine bay are in remarkable original condition and the trunk compartment is immaculate. The gear shift is unusual: instead of traditional mounting on the steering column, as with some cars of similar vintage, the gear shift is on the dash next to the steering wheel, in a ball joint configuration. Easy, smooth shifting.

Well Maintained. A virtually rust-free car with only minor paint chips and scratches, its chrome, stainless moldings, emblems, bezels and mirrors are original to the car. The only dent or ding is a small dent in the right door molding. It has a working AM dial radio, but currently lacks an antenna. The heater/defrost are in good working order, as are all gauges, lights, and windshield wipers.