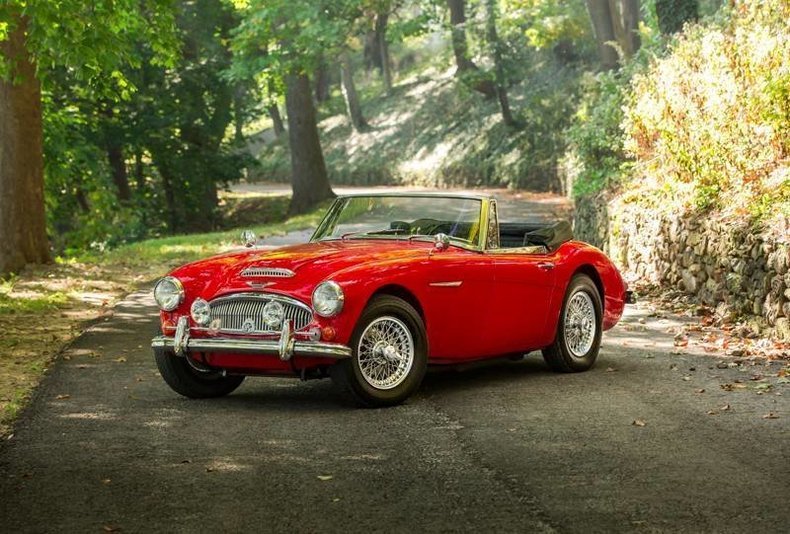 Chassis # HBJ8L34367
A Well Kept Older Restoration
Recently Serviced & Sorted
Original Colors & Numbers Matching
Offered With BMIHT Certificate
Hailed as one of Britain's most famous sports cars, the Austin Healey has long deserved the recognition it gets today as an upstanding collector car. These little sports cars incorporate all of the right elements to bring back a real understanding of what fun was like behind the wheel in the 1960's. If it were not for Austin Healey's demise in 1968, there would certainly be a rather interesting contribution to today's contemporary sports cars. Since this is not the case, today we are left with just under 43,000 units produced in total between 1959-1967. Perhaps the most sought after, desired, refined, and best variants is the MK III or BJ8 as they are commonly referred to. These last production examples offered roll-up windows, weather tight and easy to use top, heater, front disc brakes and a finely crafted wood dash and other little accouterments that make a car so user friendly and enjoyable. As such, they remain at the top of the list for any serious sports car collector or enthusiast looking to rekindle their youth.

The example on offer here is chassis number HBJ8L29131 fitted with engine number 29KRUH14259, showcasing a nicely kept older restoration. This particular Healey was restored in 1999 by the world class specialists at BRC of Philadelphia to concours level with every area of the car tended to. Currently, the early history of this car is not known but a British Motor Industry Heritage Trust Certificate has been requested and will provide more specifics as to the car's origins.

Cosmetically, the red paint shows nicely and would best be described as driver quality; not perfect but very much presentable. Under close inspection one will notice a small chip that has been touched up and perhaps a light scratch here and there along with some signs of an aging restoration. However, it still holds an eye-catching shine and maintains an element of depth that would benefit from a good buff. Upon close inspection, there are some inconsistencies that should be noted which include some chipping around the front grill and door seams. All of the brightwork is again, presentable but showing signs of aging. For example, on the mouth of the front grill and bottom lip there are signs of flaking chrome that could warrant re-plating. The bumpers show some mild pitting as well as light surface scratching that could be remedied with a thorough polishing. The windshield frame has developed some moderate surface scratching, still presentable and consistent with the driver quality condition of the car. In addition, the 72 spoke, Dayton wire wheels do have some pitting but no severe flaws that would require immediate attention. The black soft top is in great shape, free of any tears, pulls, or flaws with the only item to note being a small area where several scratches have been incurred on the soft rear window. Nothing major but worth mentioning in the interest of full disclosure. The glass on the car is of driver quality with no significant scratches of chips.

This example received a new black interior in 2005 and shows as such. The seats and door panels have not incurred any tears or cracks whatsoever and are in great shape. The door jams are presentable but have begun to reveal their age in some small areas as the paint has begun to fail around the hinges. However, this is consistent with an older restoration that has been enjoyed. The wooden dash face has held up well with the only inconsistency being a minor crack on the glove box door but nothing to quarrel over. The chrome gauge bezels have acquired some mild pitting but the gauges themselves show great and are fully operable. The dash is in great condition and shows nicely. It is to be noted that the Healey '3000' badge located in front of the shifter base has been omitted and replaced with an aftermarket clarion radio. An inspection of the rugs will conclude that they do appear a bit used but do not possess any substantial stains or rips.

Moving to the engine bay, it has a welcoming patina and retains several marks of correctness. The majority of the hoses, clamps, and mounts show as period correct and all components consistent with one another with evidence of regular maintenance. Make your way around to the trunk and one will find no issues with the spare wheel and jack present. The liner is in impeccable condition with no notable flaws, showing very well. The undercarriage of this example is very much in line with the quality of the rest of the car. It appears as structurally sound with the frame straight and true. There is no rust or evidence of any damage however, one item the underside would greatly benefit from is a proper steam cleaning.

In terms of the mechanical condition of this example, it runs and drives adequately with no serious issues to be had. The engine fires without hassle and settles to a comfortable idle rather quickly. Once up to temperature, one can really start to indulge in the usability of these cars and embark on spirited back road driving. Depress the throttle pedal and the engine pulls nicely letting out a lovely 'gruff' exhaust note. The engine produces normal oil pressure but does tend to run a bit hot at times as typical with many British cars of this era. This issue is currently being investigated and will be remedied prior to the sale of the car. The clutch functions as it should and the transmission goes in and out of gear with ease. Apply the brakes and there is no fade or pulling to note; functioning as expected. The steering feels tight and precise displaying no evidence of any adjustments or repairs necessary.