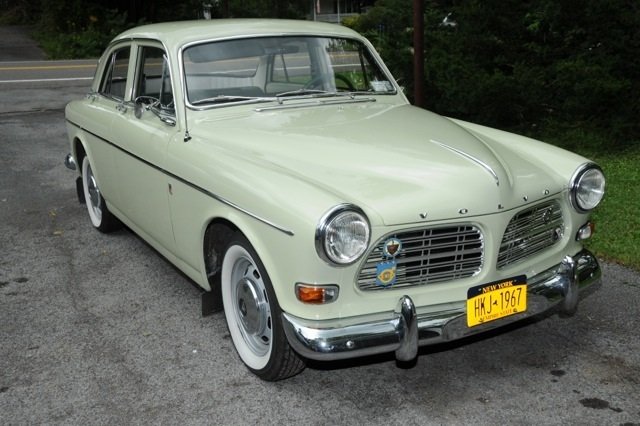 This is a 50-year old classic Volvo sedan with less than 60,000 miles. In amazing condition with its original paint, original interior and original drivetrain. Only four owners during its long life. Of course there have been some careful upgrades including ipd sway bars, Pertronix ignition from ipd, and a rebuilt brake servo.

A pleasing more rounded shape than its predecessor, the PV544, these Volvo sedans look like an American or Italian design from the 1950s breaking with the 544 which looks like a throwback to the pre-war era. Sometimes known as the Amazon, these sedans also sported more legroom and bucket seat comfort.

The 1800 cc 4-cylinder engine is not known as a powerhouse but does produce about 100 hp. More importantly, these Volvo engines are reputed to be bulletproof and are incredibly reliable. It features two side draft SU carburetors and a 4-speed floor mounted transmission. The sedan now sports power brakes thanks to a rebuilt brake servo from Apple Hydraulics. Parts for these cars are readily available.

1967 was the last year of production for the 122S 4-door sedans and the only year for an improved rear suspension.

This Volvo 122S “Amazon” in exceptional condition is an excellent starting point for anyone entering the classic car hobby or for someone who just loves these iconic Swedish vehicles.

Below is an article which was published in the Rolling Magazine, Volvo Club of America May-June 2018 edition.

Mike Carney was well known among
central New york Volvo enthusiasts.
I first met Mike in the 80s when he pulled
up to my shop in his '68 122 wagon. We
became good friends; Mike even let me borrow
the wagon for my class of '68 20-year
reunion.
It wasn't his first Volvo. No, that would
have been his 145E or his 1800ES, both
troublesome. yet, he stuck with the brand,
buying an early 240 that continued the teething
problems. Then he got the wagon, which
he owned for over 20 years before selling it
to Joe Lazenby.
But mike had his eye on another 122. He
had tracked down an all-original 1967 122
4-door sedan, with 38,000 original miles, in
Kansas. It was first advertised in the January
2003 issue of Rolling by Charlotte Erb.
Sonny Maynard in Olathe, Kansas ended up
buying it.
The car had been purchased new by
Seymour Erb, a Volvo mechanic in Williamsport,
Pa., and his wife Charlotte. They kept
it in their garage until Seymour passed away,
having driven only 33,000 miles with it in
36 years.
Sonny put another 5,000 miles on it before
Mike finally convinced him to sell it in 2008.
mike was the kind of guy who drove his
cars. He put 20,000 miles on it over the next
eight years. “If there's a better one around,
show me,” he said. He made some improvements—
new tires, rebuilt the servo, and so
on, but he treasured the car's originality.
you may remember mike from his occasional
contributions to Rolling. He was
always trying to trace the origin of some
piece of Volvo memorabilia, like the old
Volvo badge or the tennis racket. He never
did find out where that stuff came from. In
October 2016, mike went in for a second
heart surgery—he didn't make it home.
I purchased the car from mike's daughters
the following month and drove it to a couple
shows in 2017. I took it down to Watkins
Glen for the vintage weekend. It drives
like a new Volvo, straight down the road,
cruising all day long at 75-80 mph. It's approaching
60,000 miles. That's a big, round
number, but I'm going to let somebody else
cross that line.
The Erb-maynard-Carney 122S is
consigned to the Saratoga auto auction, to
be held September 20-21 at the Saratoga
Performing arts Center. That's one week
before the VCOa National meet in Stratton
mountain and Saratoga is practically on the
way to Vermont. This auction benefits the
Saratoga auto museum.