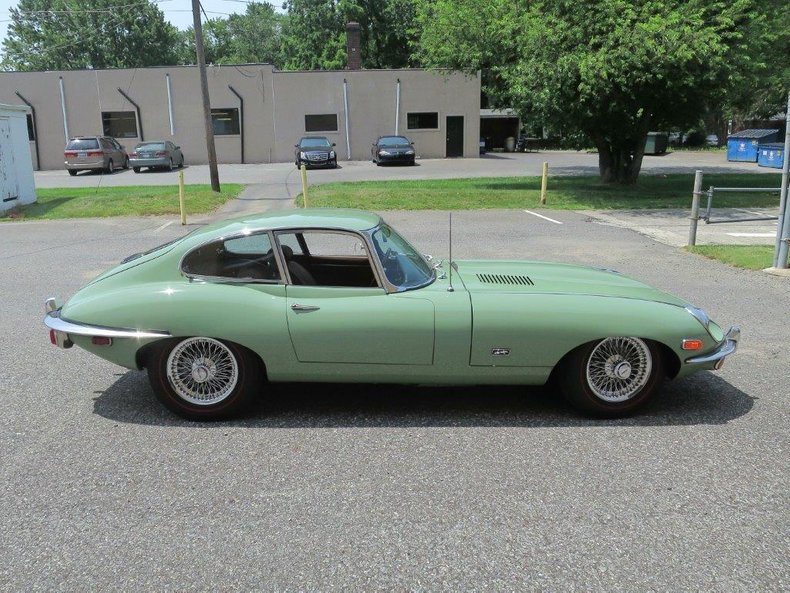 The favorite topic at any meeting of Jaguar enthusiast is which is the best model of the beloved E-Type. Some favor the early version known as the “flat floor” model, later called the Series I. Another candidate for most desirable is the V12 powered Series III with its enormous engine and power. Arguably the most desired E-type of all is the Series II Fixed Head Coupe with its styling balance and perfect proportions coupled with unforgettable performance.

As an example of a coveted classic sports car, this carefully maintained and beautifully presented Series II 4.2 liter Fixed Head Coupe (FHC) with its Willow Green factory paint color has been with the same owner for three decades. The mileage is less than 60,000 miles and it has been serviced a regular basis by Jaguar experts. The beautiful tan leather interior is new and correct and features the wider and more comfortable bucket seats found the Series II.

The Series II FHC is a grand touring car that can cruise at speed for hours. The bored out 4.2 liter XK engine is bigger than the Series I 3.8 but puts out the same 265 horsepower but as a sleek coupe can hit a top speed topping 150MPH. Because of added torque it reaches speed quickly. This coupe also features three of the more desirable SU carburetors and the original Stromberg carb will be included with the car. The Jaguar designed all synchromesh 4-speed transmission in the Series II marked a huge improvement over the original Moss gearbox. Four power assist disc brakes can bring the coupe to a quick stop.

Based on the famed D-Type Jaguar that dominated the 24 Hours LeMans race in the 1950s, this car was designed by aerodynamist Malcolm Sayer on aircraft principles. The body features a single hood over the engine bay, a monocoque chassis with a steel tub at the center and strong steel frame for the front suspension and engine. The suspension is all independent with a limited slip differential. The E-type is famous for its precise handling and smooth ride.

Another improvement in favor of the Series II coupe is the headlights. Purists would argue that the glass hoods over the headlights on the early car contributed to the stunning looks of the E-type. Perhaps they did but they also could be dangerous because with time they became fogged and it could be difficult to see at night…particularly at the speeds of the E-type. With the safety concerns of the late 60s, particularly in the US, headlight covers were removed. The wrap around bumpers and larger brake lights are also a result of US safety regulations.
The restyled front opening also helped correct overheating problems.

This car is equipped with a late option, air conditioning. The fold down shelf in the back allows more room for luggage further enhancing its value as a high-speed touring car ideal for long trips. Chrome 72 spoke wire wheels are a great finishing detail on this coupe.

A matching numbers car, it also has full Jaguar Heritage documentation. The long-term owner describes the condition of this car as “very good.”

Properly celebrated as a work of art, this 1971 E-type Series II Fixed Head Coupe will add style and performance to any automotive collection.