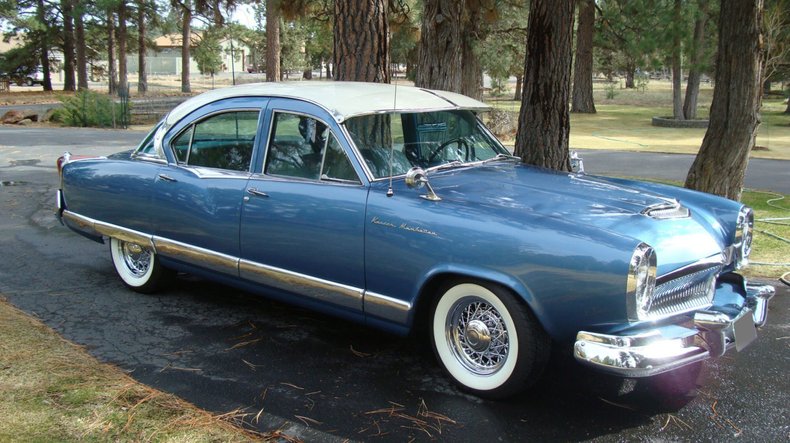 On July 25, 1945, Henry J. Kaiser, producer of Liberty Ships during WWII teamed with Joseph Frazer, Packard executive, and announced the formation of a new corporation, Kaiser-Frazer, which would target the growing post-war demand for automobiles. Leasing Ford's Willow Run plant from the War Assets Administration they produced 11,000 cars in 1946. After a few profitable years, the company lost $30 Million in 1949. Frazer left the company. In 1951 Howard “Dutch” Darrin redesigned the company's flagship Kaiser Manhattan. With its rounded roofline, trapezoidal glass treatment, concave waterfall grille and a fender line that curved gently from front to rear, embellished by a slight dip under the rear side window that became known as the “Darrin Dip,” which was echoed by peaks in the windshield and rear windows, it is considered to be one of the most beautiful American designs of the early post-war era.

The 1954 Kaiser Manhattan, considered the most elegant of Kaisers, included rear reflective lenses that accentuated the Manhattan's tail fins and a hood scoop that coordinated with the chrome lines of the concave grill. It was advertised as the safest car in America due to its wrap-around bumpers, low center of gravity, drop-out windshield, padded dash and excellent field of view for the driver. 4,107 of these elegant sedans were produced and few remain.

This restored and modified '54 Manhattan has survived and remains on the road largely due to the Chevy 350 Small Block V8 and TH350 Transmission that has been swapped for the car's original 6-cylinder 226 cid L head engine and Hydramatic Transmission. Other modifications include: Chevy 10 bolt rear with 3.00 to 1 ratio, 4-wheel power disc brakes, full 1987 Camaro front clip and suspension and power steering. Aside from the AM/FM Cassette deck with rear speakers, the exterior and interior are original, repainted in the original Cream over Teal with reupholstered seats. This was the era of large steering wheels, roomy bench seats, vent windows and plenty of chrome and this car has it all.