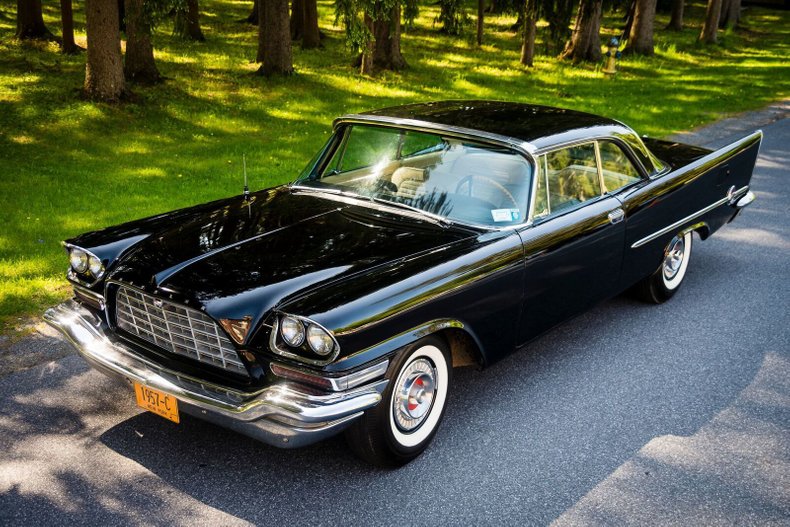 A special and rare survivor, this is one of 18 Chrysler 300Cs produced in 1957 with an optional performance package designed for NASCAR competition. Of those 18 cars only three survive to this day and this unrestored 300C remains as a unique example of the very first muscle cars. The other cars are the “mule” Chrysler used to engineer this special run and the other is in New Zealand and restored.

Big and very fast these cars were a sensation during the mid-Fifties. Chrysler 300s were so named because the original models delivered 300 horses. The car consigned to this auction put out significantly more power. Featuring the famed V8 392 cu.in. “hemi” engine this Chrysler was modified with larger exhaust manifolds and pipes and a Snyder roller camshaft installed by Chrysler. The horsepower was increased from 375 to 390. The exhaust system still has hand made metal part numbers welded to the pipes to pass NASCAR inspection. On the dash a large tachometer is installed in the middle where the clock normally sits, another giveaway this car was intended for competition.

The heavy-duty suspension was also as revolutionary as the hemi engine because Chrysler used torsion bars to provide a stiffer suspension than normal in the era.
At 4600 lbs. this is a big car so the drum brakes were large and the best of their day but not up to the standards of disc brakes. A unique air scoop under the headlights helped cool the front brakes.

The three-speed stick shift is a replacement for the original but is a Chrysler NPG all-synchromesh three speed built in 1967 and purchased from a local NASCAR racer.

These original muscle cars are a memorable sight on the road with their sweeping rear fenders and substantial front grill. A two-door coupe, this 300C has been repainted in its original black and the interior is in beige leather.

The car is unrestored but has been carefully stored since 1984 in a dry urethane insulated garage that has no dew point and helps prevent rust.

Purchase by the current owner in the early 1960s, this car only 61,000 actual miles on the odometer.

The long time owner is a nationally recognized authority on these cars and a show judge for Chrysler 300s.