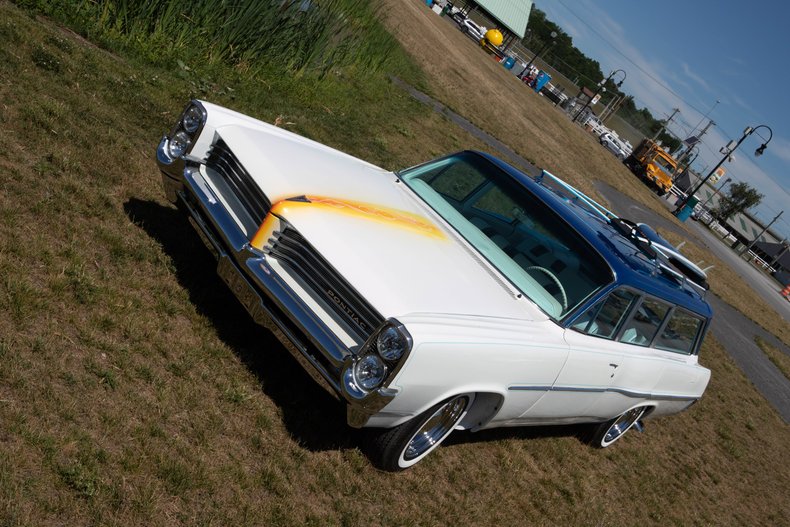 Artie's Party Cruiser is a totally customized 1964 Pontiac Catalina Safari station wagon built by a group of sponsors and volunteers to benefit the Ronald McDonald House of CNY.

This project has been put together by famed pinstriper artist “East Coast Artie” Schilling who organizes a charity event with volunteers from the pinstriping community during the Syracuse Nationals each summer. Known as “Artie's Party” this event has raised hundreds of thousands of dollars for the Ronald McDonald House over the years.

This project station wagon was originally donated to Artie for just a paint “cleanup” and pinstriping with the idea the “long top” would be used as a fundraiser. At this point, Artie has taken off with this idea and a simple cleanup has moved to a whole different dimension

Thanks to Artie's drive and support from enthusiastic sponsors and volunteers, now, a somewhat battered and tired old station wagon is being totally customized from the frame up. “Artie's Party Cruiser” is well on its way to becoming an eye grabbing “surfin” station wagon.

Joe Que's Auto Body in Poughkeepsie took the body off for a complete
rotisserie customization from end to end. This could not have been done
with out the help of over 50 manufacturers and suppliers getting on
board from start to support Ronald Mc Donald House of CNY

The 389 cu.in. V8 has been rebuilt by Jasper Engines and is now being installed along with a rebuilt transmission and the other drivetrain parts.

This is going to be truly a “Surfin' Safari,” the classic retro interior will be finished in white pearl vinyl with blue Pendleton plaid wool material…the same plaid worn by the Beach Boys on the cover of their “Surfin Safari” album.

The Party Cruiser is scheduled to be completed by July. There are a number of events where you might be able to see this work of “surfin' art” during the summer after completion.

This is an incredible opportunity to own a “custom wagon” work of art and to donate to a worthy charity at the same time.