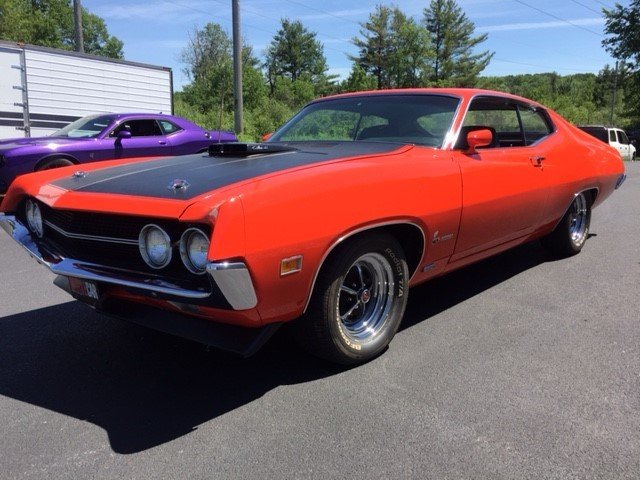 At the time we didn't know it but 1970 would mark the end of an era in Muscle Car history. By 1980 gas would triple in price and forget finding 100 octane. Insurance companies raise premiums because of the direct relationship between horsepower and claims filed. The Feds wanted clean air and that strangled performance.
We are offering at auction an extraordinary example from 1970: a Ford Torino Cobra Jet Sportroof. Because the Torino was Ford's weapon of choice for NASCAR, the Cobra Jet was loaded with high performance good stuff. Our numbers matching Cobra Jet, featured on the cover the November 16, 2016 issue of OLD CARS: WEEKLY NEW & MARKET PLACE, is equipped with a 370 hp 429-4V CJ Ram Air motor, a four speed “top loader” and 3:50 rear end. It also has a competition suspension with staggered rear shocks. It is painted in a stunning Calypso Coral with a black interior that has Turin Knit vinyl bucket seats; full counsel and AM radio. The crowning and very cool feature is the flat black hood with a “shaker” air cleaner.
A previous owner found the Torino on craigslist and jumped on it. Having spent all of its life in the south, he knew it would not have the rust problems that plagued most Torino's. To upgrade performance, he added a .570-lift Crane Cam and Hooker headers.
Of the 407, 502 Torino's made in 1970, just 7,675 were Cobra Jets. The lucky bidder who wins this car will have an extraordinary example from an era when all was possible.
* VIN #OA 38J144840
* A Magazine Cover Queen
* "J” code 429 cid, 375 hp, V8 4BBL Ram Air
* Hurst 4 speed
* Detroit – locker
* Competition suspension w/front coils
* Extra-long rear leaf springs
* Flat black hood
* Optional 15” Magnum wheels
* Body off restoration