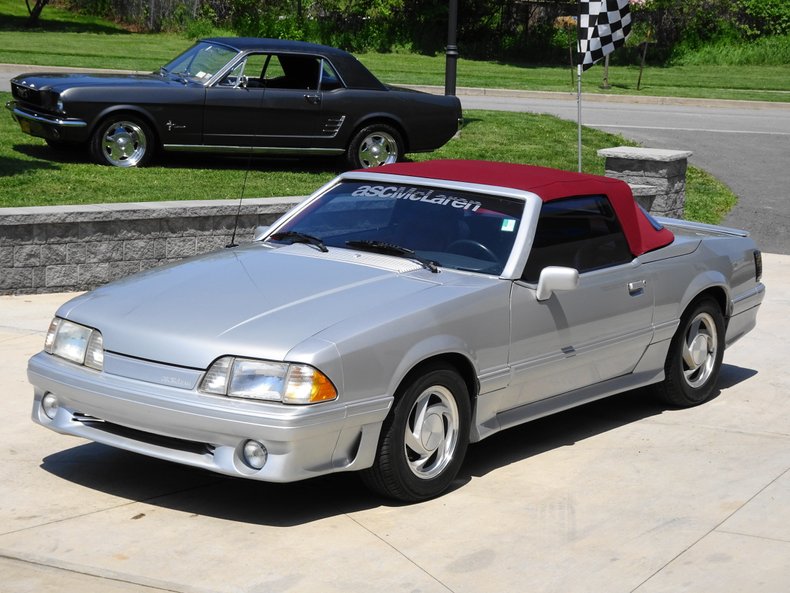 History of the ASC Mclaren Mustang
Engineer Paul Muscat commissioned American Specialty Cars (ASC, formerly American Sunroof Corp) to undertake the conversions, and they partnered with McLaren, who was already doing suspension mods to the Mustang. Fast forward to 1987, and the year in which ASC McLaren went full Mustang. and benefits not only from its custom bodywork and bespoke ragtop, but also from a slew of improvements Ford gave the pony car line that year.

Our Mustang still looks pretty fresh, the SILVER paint demonstrating no obvious flaws and all of the bespoke ASC McLaren bits remaining intact. From a distance it resembles your standard GT, however up close you will notice the subtle changes. The windshield rake is more aggressive and surround is body color, as opposed to black, the front grille plate sports an offset embossed ASC McLaren rather than the centered chrome pony, and the taillights also differ from the louvered lights of the stock GT.
The major change was the replacement of the back seat with a hard tonneau'd well for the convertible mechanism and top. That BURGUNDY top sports three plastic windows unlike the factory Mustang. The top is far better integrated than Ford's factory option, and eliminates the back seats and in their place are a pair of footwell-located storage bins one-upping the factory GT which limits you to the trunk or puny glovebox for covered storage. And for two, there's plenty of space as both driver and passenger get premium styled leather-covered sport seats.

Ford's evergreen 5.0 HO V8 302 received a larger throttle body, as well as E7TE heads from the F-series trucks, and TRW forged pistons. All those changes were good for 225-bhp and 300 lb-ft of torque, which should give this McLaren, serious go to match its show
.
Our very low mileage beautiful Silver outside with burgundy leather trimmed interior and a New matching Burgundy convertible top is a stunning combination.

Give us a call on this exciting blend of Ford and Mclaren creativity in excellent condition and ready to cruise top up or down.