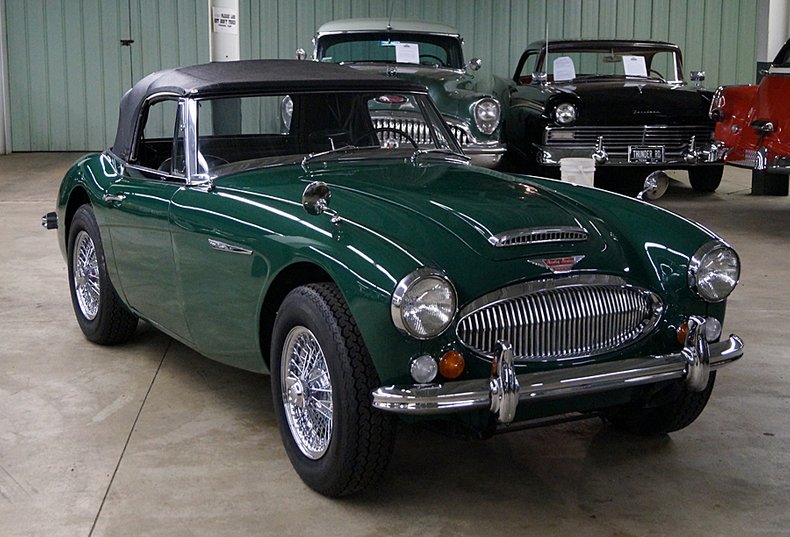 The Austin-Healey 3000 was manufactured built from 1959 to 1967, known as the “big Healey”. The car's bodywork was made by Jensen motors and vehicles were assembled at BMC's MG works in Abingdon with the corporation's MG models. Initially a 2 seat sports car they eventually progressed to include 2+2 style jump seats in the rear.
The 3-litre 6-cylinder 3000 was a highly successful competition car, winning its classes in many rallye and racing events. These cars are still raced in vintage racing events today.
The 3000 sports convertible Mark III was announced in February 1964 with its power increased from 136 bhp to 150 bhp by a new higher lift camshaft, SU HD8 carburetors replaced HS6 units increasing the choke size from 1.75 to 2 inches. Power-assisted braking became standard instead of optional. The new car's fascia displayed its speedometer and tachometer directly in front of the driver.
The Mark III BJ8 remained in production until the end of 1967 when manufacture of Austin-Healeys ceased. Only one further car was built in March 1968. BMC thought the car's place would be filled by the 6-cylinder MGC. Many consider the 1967 3000 Mk III the high water mark of all Healeys.
Presented here is a nice example of a 1967 Austin Healey 3000 Mk III BJ8, vin. #:HBJ8L36369, and is offered in correct, British Racing Green over Black with white piping interior. It features a fairly extensive body-on restoration done to a nice standard with a total respray, new chrome, new chrome wire wheels, new radial tires, stainless steel exhaust, beautifully restored engine bay, carpet and new top. This car was in a private Southern Ohio collection many years before entering the current collection and then restored. The very solid body did not show signs if internal rust prior to respray. This is a British Heritage Certified car and carries the appropriate certificate, authenticating the car has the correct engine and body numbers and is numbers matching.
Just in time for Fall foliage touring in the Adirondacks, this Healey 3000 will bring many years of touring pleasure and prove to be a wise investment at the same time.