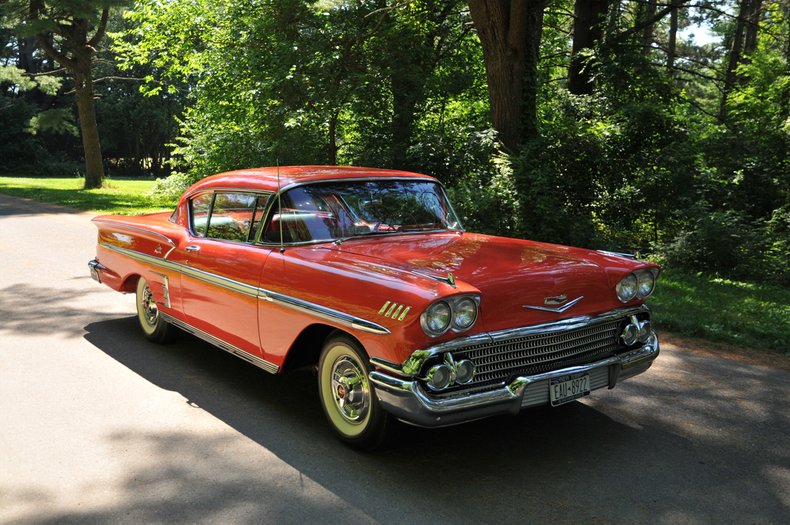 1958 marked the 50th anniversary of General Motors. To celebrate, all the divisions of GM were tasked to create a special model. Chevrolet introduces the Impala to replacing the Bel-Air as the top of the line. The new Chevy was lower, longer, and wider than its predecessors. The old perimeter-type of frame was replaced by an elongated “X” that improved torsion rigidity and allowed for lower placement of the passenger compartment. With a more rigid body, lower center of gravity and using coil instead of leaf spring in the rear, this was the best handling Chevy up to then.

We are offering a fine example of a 1st generation Impala for auction. This 100% rotisserie restored hard top has only been driven a few miles since restoration. This handsome coral colored Impala has a fine coral/black interior that still has the original AM radio and clock. The exterior is set off with California bumpers both front and rear. All the chrome has been done in triple plate show chrome. It has power steering and brakes.

Under the hood, brand new for 1958, is a Type W Turbo-Thrust 348 ci V-8. The V-8 has a tri-power set up that puts out 280 hp. It is connected to, a correct, Turbo glide transmission. All the hot gases go through dual aluminized tailpipes and muffler.

Too long late 1950's and early 1960's Chevys have lived in the shadow of the “Tri-Five”. The time has come for these cars to shine on their own in terms collectability and value. This 1958 Impala will be a great car and investment.