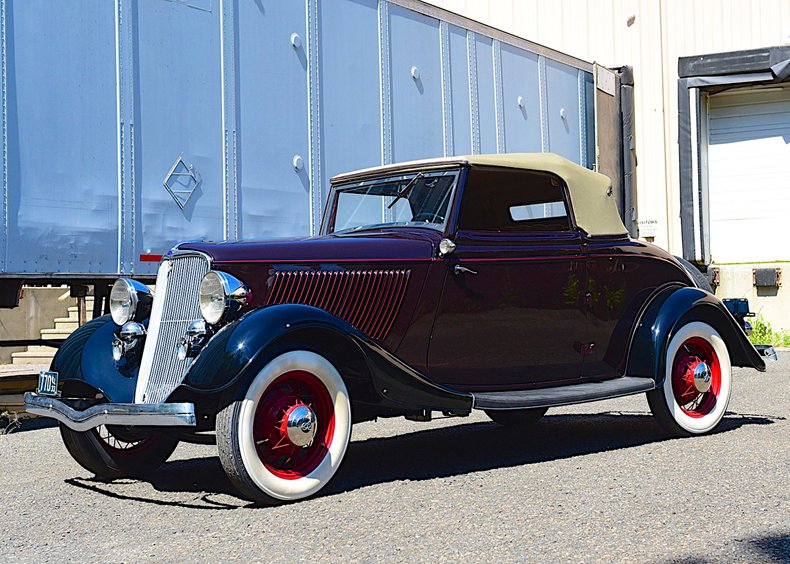 Ford introduced the famed flathead V8 engine with the 1932 Model Year, as the Model 18. While becoming an instant success and eventually hot rodding icon the model 18 was built that first year only. Ford chose to go with a completely new body for 1933, the model 40. While retaining the 221 cu in Flathead V8 and Three Speed Manual transmission, horsepower grew to 75 in 1933.
The new Ford was decidedly more streamlined and modern. The wheelbase of the new heavier duty frame became 106 inches. The Cabriolet offered the comfort of roll up windows and luxury of a closed car in an open air convertible. The model 40 was continued into the 1934 model year with minimal changes.
The 1933 Ford Deluxe model 40 V8 Cabriolet, being offered enjoyed a full frame up restoration in the Noel Biery Ford Collection, of Beecher, Illinois. The Biery collection was well known for top quality 1932-34 Fords. The car most recently resides in the Gary N. Brown Collection of upstate New York. Finished in a Deep Coach Maroon with Vermillion pin striping and wheels accented by authentic wide white wall tires. The interior is tan with deluxe wood grain, tan Haartz top, chrome top bows as well as an inviting rumble seat. The quality of this car is truly impeccable, with the final restoration details only complete just in time to be offered at the Saratoga Auto Auction. This exquisitely restored, totally unmodified, example of a 1933 Ford model 40 Deluxe Cabriolet was built in the first three months of production and as such carries several 32' style parts from the factory, much like other early Fords like this Cabriolet. 33's of this quality and provenance seldom come to market. This is truly a rare opportunity, and Best of All, this car is being offered at “No Reserve” to the highest bidder!