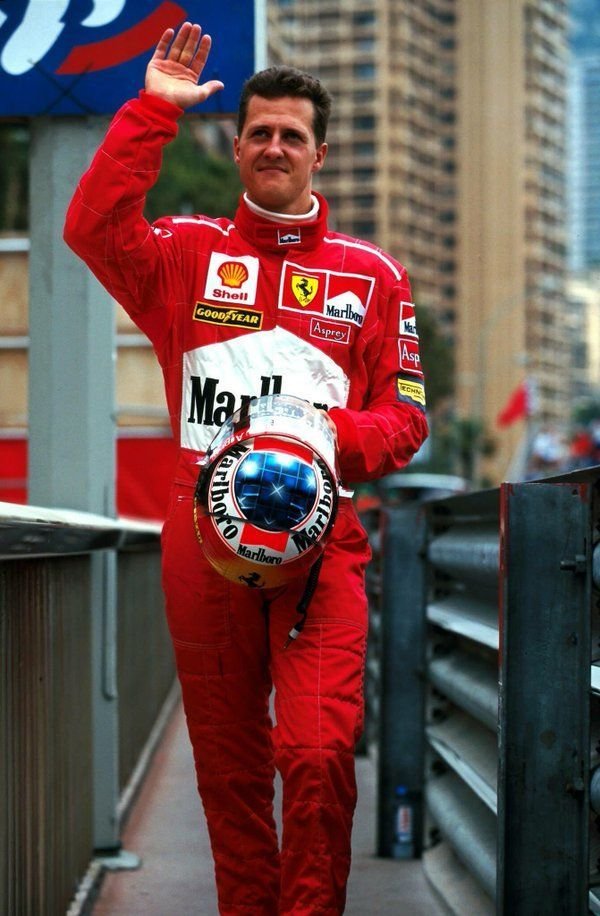 Taking place at the Autodromo Enzo e Dino Ferrari in Imola on April 26th, the 1998 San Marino Grand Prix witnessed Ferrari driver Michael Schumacher finish third in qualifying behind McLaren-Mercedes drivers David Coulthard (first) and Mika Häkkinen (second). Ferrari had hoped to topple McLaren's dominance, and following suit with Tyrrell Racing, bolting fitted 'side-wings' atop the sideboards. This modification did little to dethrone McLaren though, with Coulthard winning the race, followed by Schumacher. We have a signed Ferrari F1 Team race-worn suit worn by Schumacher, photo-matched to the San Marino Grand Prix weekend! In solid Ferrari red, A Nomex III label sits affixed to the collar, with “OMP” and “M. Schumacher” embroidered over the belt, with his name again added over the reverse, along with “S. Marino 3” and the date of “26/04/98”. Sponsorship patches from Marlboro, Good Year, Asprey, TechnoGym and Shell are affixed, with Schumacher signing across the left chest, adding “To Gino”, with the signature somewhat lighter then when first penned. The race suit was then gifted a second time, with a second mostly worn-away signature beneath with “Pour Guy”. We should also note a customization to the suit, with padding added to the interior over each shoulder. Hailing from the personal collection of Guy Lafleur, his signed LOA will accompany.