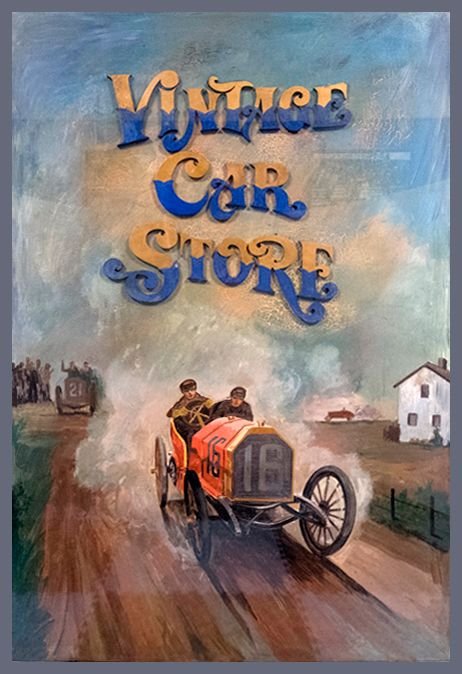 Vintage Car Store was opened by Ed Jurist in the late 1950s at South Broadway, Nyack, NY in a 1920s Art Deco building, originally a Cadillac showroom.
Jurist was the first person to provide access to vintage automobiles in a lavish setting. He had a huge following of famous automobile collectors, restorers, automotive artists and writers throughout the world.
This is the original sign which hung on the outside wall at the showroom entrance. It was painted by one of Jurist's many automotive artist friends based on a painting by Peter Helck of the 1906 Locomobile
#16 winner of that year's Vanderbuilt Cup race. This 16.23 liter monster was owned by Helck from 1941 until his death.
Dick Fritz has owned it for 28 years and for over a decade it has been hanging in the conference room of the Saratoga Automobile Museum. It is in prime condition. A piece of automotive art with a purpose and a great story.