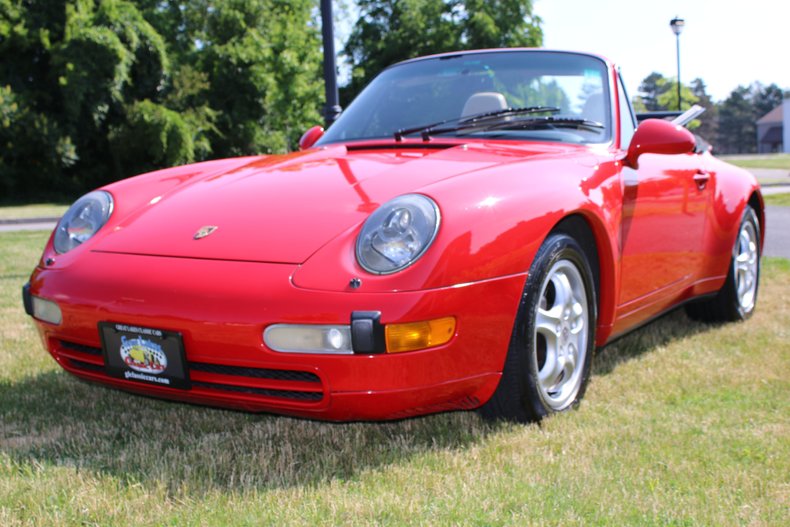 1995 Porsche 911 Carrera 2 Cabriolet 993 3.6L H6
So many numbers,,, Bottom line all it means is, Awesome Air Cooled Gem!
Porsche has done a phenomenal job at making great cars over the years and enthusiasts worldwide have ensured that these are the ones to get...
It doesn't get more iconic than a Guards Red Porsche Convertible
Proven performance ready air-cooled H6 Porsche 6Cyl
Steptronic Auto-manual transmission
Leather High Back Bucket Seats
Power Top
3rd Brake Light on Fixed Wing plus
Speed Sensing or Manually Activated Rear Spoiler
Cup Wheels
Drilled Vented Brake Rotors
Dual Exit Exhaust
This is simply a beautiful Porsche!
The Porsche 993 is the internal designation for the Porsche 911 model manufactured and sold between January 1994 and early 1998 (model years 1995–1998 in the United States), replacing the 964. Its discontinuation marked the end of air-cooled Porsches.
The 993 was much improved over, and quite different from its predecessor. According to Porsche, every part of the car was designed from the ground up, including the engine and only 20% of its parts were carried over from the previous generation. Porsche refers to the 993 as "a significant advance, not just from a technical, but also a visual perspective."Porsche's engineers devised a new light-alloy subframe with coil and wishbone suspension (an all new multi-link system), putting behind the previous lift-off oversteer and making significant progress with the engine and handling, creating a more civilized car overall providing an improved driving experience. The 993 was also the first 911 to receive a six speed transmission.
The 993 had several variants, as its predecessors, varying in body style, engines, drivetrains and included equipment. Power was increased by the addition of the VarioRam system, which added additional power, particularly in the mid-ranges, and also resulted in a more throttle noise at higher revs; as a consequence, resulted in a 15% increase in power over its predecessor.
The external design of the Porsche 993, penned by English designer Tony Hatter, retained the basic body shell architecture of the 964 and other earlier 911 models, but with revised exterior panels, with much more flared wheel arches, a smoother front and rear bumper design, an enlarged retractable rear wing and teardrop mirrors.
A 993 was promoted globally via its role of the safety car during the 1994 Formula One season.