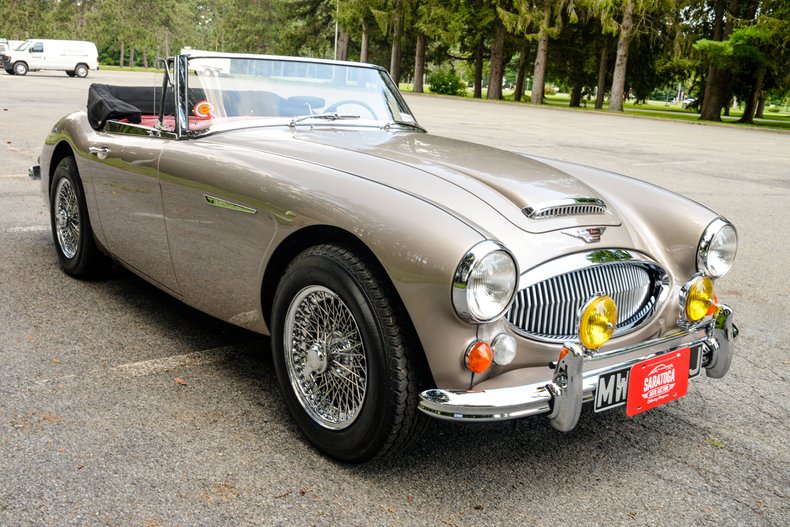 Up for consideration at Saratoga Auto Museum Auction 2019 is what I consider one of the nicest 1967 Austin Healey BJ8's in the country.

This 1967 Austin Healey 3000 was first delivered in Europe as a "Personal Export Delivery", most likely the first owner, a US Soldier stationed in Europe. Personal Export Delivery is indicated on the Certificate of Heritage. Sometime between January 1967 and September 1969, the car was shipped back to the United States and the soldier/owner in Ohio, first registered the car in the US in 1969. We purchased the car from that owner and have a copy of the first 1969 Ohio title. This Healey was factory built as a black car with red interior. We decided to change the color to Golden Beige Metallic during restoration which is a true color for the 67 model year Healeys. The red vinyl was also change to a more Maroon Connolly leather. The mechanicals are all numbers matching and they are indicated on the Certificate of Heritage.

The owner in Ohio drove the car regularly for a period of years, and then decided in the early 1980's to perform mechanical rebuild of the Engine and Transmission. Like many restorations, the idea seemed good. While the mechanicals were out of the car, the owner then decided to freshen up the interior. Most of the interior was then pulled out. While the interior was out, it was then decided to give the car a quick paint job. Well, you know how that goes..... this project stalled and the car sat in the dry garage for a period of about 25 years. Photo's verify a very comprehensive restoration performed on this Austin Healey.

This 1967 Austin Healey 3000 was purchased from the previous owner in Ohio in late 2015 and started a comprehensive nut and bolt rotisserie, body off restoration by Knut Holzer, British Restoration Corporation. Knut and his shop of experienced restorers have restored upwards of 450 Austin Healeys and Jaguars over a period of 30 years. In my opinion, this is the Premier Restoration Shop in the Country for Healeys. All of the original body panels were in good condition and used in the restoration. The engine and transmission were rebuilt by a Machine shop in Pennsylvania that specializes in British Cars. Engine was balanced and line bored. Engine was built 20 over, with Performance cam. Engine was built to be about 170 hp. HD8 cabs were rebuilt and polished. 2" Stainless Steel Sport exhaust system (Europe), great sound. The stock starter and oil filter housing both have been rebuilt and are on the car. Original stock radiator was sent out and fitted with an additional core for cooling. We also installed a thermostatic electric fan installed before the radiator (hardly visible). The stock 4 speed transmission with electric overdrive have been completely rebuilt and operate flawlessly. Differential have been fully restored with stock ring and pinion, bearings and seals. New front coils. Rebuilt rear leaf springs. All brake and clutch hydraulics are new or restored. Steering column has been rebuilt. Heater box restored, pedal box restored. New horns, complete new wiring harness, all new lights and housings. Lucas yellow 576 fog lights (need to be wired), Lucas 24 hrs Lemans head lamps. Gauges rebuilt/restored by Nisonger, New York. All new triple plated chrome (Europe). All new glass, even the vent windows. New old stock Triplex Windshield. Restored Convertible top frame. 5 New Dayton 72 spoke Wheels and adapters. Tires are Vredestein 185 Sport Sprints. Tires and wheels have been balanced by Hendricks speed shop ($800 balance). Carpet Wool is light Maroon Wilton Wool. The full interior is light Maroon Connolly leather. Seat belts are Maroon and period correct lap belts. The Convertible top, Boot cover and full Toneau cover and all Mohair and were manufactured in Europe. The paint is Glasurit, German base/clear paint. All body panels, inside of the tub and boot as well as the underside of the car has all been sprayed in base and then clear coat. The paint on this car is flawless. The fit of the body panels is remarkable. The body panels were fitted probably 8 times throughout the restoration to ensure a great fit and perfect gaps. There was no expense spared in this restoration work. The total restoration efforts for this car exceed $100K. This is a complete body off, Rotisserie restoration. Certificate of Heritage will accompany the car to verify engine, chassis and Vin to be numbers matching. There is also an extensive photo album to document the level of restoration represented.

This Austin Healey 3000 was Shown/Judged at the 2017 British Invasion Concours Show in Stowe Vermont. The car finished 1st place in the "Concours Premier Group" and overall "Best in Show Concours". The car has only been drives about 230 miles since the restoration, and stored in a climate controlled garage. This car should be considered a High #1 car.