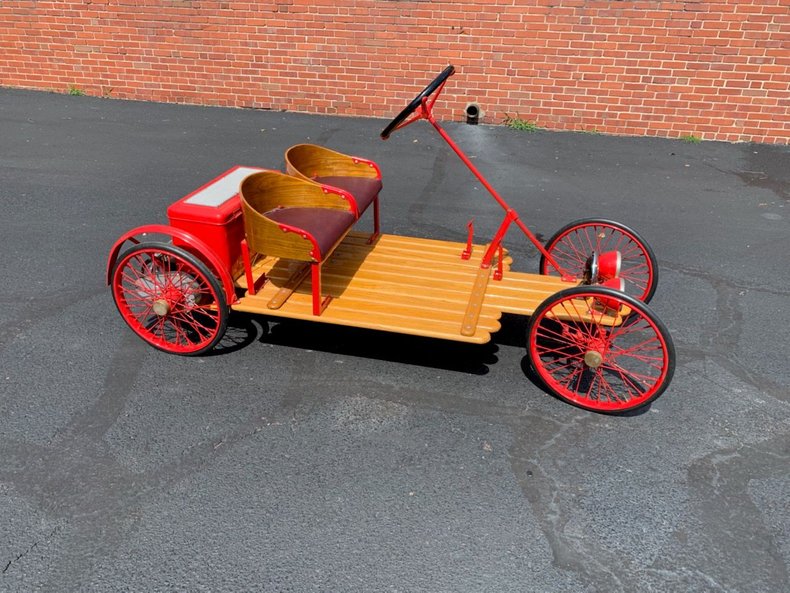 In the late 1910s an open-aired vehicle, eventually named the Auto Red Bug by its manufacturer, was introduced to the Jekyll Island Club. Red Bugs were first discovered by the Club's carpenter Chris Nielsen, who was searching for a company producing small-sized wheels. Nielsen, constructing a bicycle for his young son David, obtained the wheels he needed from the company Briggs and Stratton. This company was using the wheels on a small-motorized transport called the Flyer, the Red Bug's first name.

Chris Nielsen talked to Club superintendent Ernest Grob about the vehicles and one was bought as a prototype for the island. The island roads, paved with crushed oyster shells, made driving around Jekyll with Red Bugs uncomplicated. The transport became an instant success and soon others were purchased.

The Red Bug obtained speeds of up to 25 miles per hour and was powered by a motorized fifth wheel, positioned at the rear of the vehicle. Designed originally as an economical car, the gasoline version was replaced around 1925 with the slower-operating electric model.

A 1928 Country Life magazine advertisement for the electric Red Bug offers this description of the vehicle, "It operates on standard automobile storage batteries, rechargeable in your own garage or at any service station. It is fully equipped with emergency brake and parking lock. Red Bug has powerful headlights and taillight for night driving, and [a] standard automobile horn." Throughout the late 1920s the electric Red Bug was sold in the United States as well as in Europe. In France the vehicle was marketed as the Le Red Bug. Although becoming popular ride attraction at many amusement parks, by the 1930s the Red Bug was no longer manufactured.

While the Club possessed numerous electric and gasoline Red Bugs, by the late 1920s many of the members and their families had purchased their own. In 1941 the Club rented Red Bugs for $3.00 a day or $20.00 for the entire week. Privately owned Red Bugs could be stored in the garage and maintained for .50 cents a day. In comparison, the Club rented a chauffeured automobile for $5 an hour.

In the 1940s, with the state's procurement of the island, the Club-owned Red Bugs were sold to business proprietor Brantley O'Quinn. For a time, O'Quinn rented the Red Bugs by the hour to vacationers on St. Simons Island. In the 1950s the vehicles were sold to the Kut-Kwik Tool Co, a manufacturer of lawn mowing equipment.