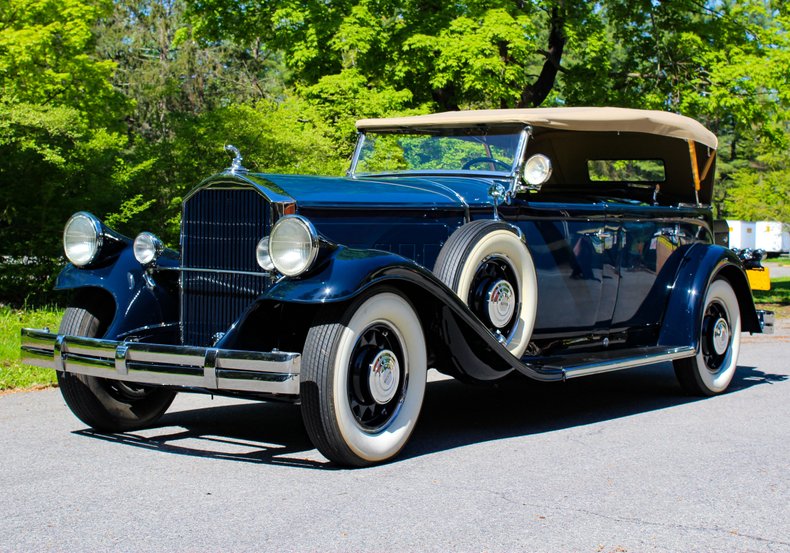 Pierce-Arrow automobiles were built in Buffalo, New York from 1901 to 1938. Founder George N. Pierce began by manufacturing bicycles, bird cages, refrigerators and then motorcycles. By 1908, his Great Arrow sixes were the equal of anything sold on either side of the Atlantic. Pierce cars were conservative, like the wealthy clientele they served. Enthusiasts argue the company's finest hour was from 1910-1913 with its luxurious Model 48s and 66s. The big prestigious models were largely hand built, with precisely machined componentry.

In 1913-1914, Pierce offered a unique, patented headlamp treatment designed in-house by Herbert M. Dawley. The lights were gracefully (and very distinctively) faired into the front fenders; they instantly signified a Pierce-Arrow. More Pierce innovations included extensive use of aluminum, including cast alloy bodies, hydraulic tappets, power brakes and as early as 1907, a column shift. Curiously, Pierce-Arrow cars retained right-hand drive until 1920, long after most makes had abandoned this practice.

In 1928, financial difficulties ensued due to slowing sales and a preponderance of model offerings. Pierce-Arrow merged with Studebaker. Sales increased in the short term, but despite available custom bodywork by America's finest coachbuilders and a powerful V-12 engine option, the Depression took its toll and units dwindled. Not even the dramatically-styled, streamlined Silver Arrow show car (just five were built, at a cost of $10,000 each) could save the company.

This example, a Model 42 Dual Cowl Phaeton rides on a 142-inch wheelbase. It's powered by a 132-bhp, 385-cid straight eight with a four-speed manual transmission and freewheeling, that could be engaged or disengaged via a lever on the dash, along with powerful Bendix duo-servo mechanical brakes. This Pierce also features a built-in bar for the rear seat passengers.