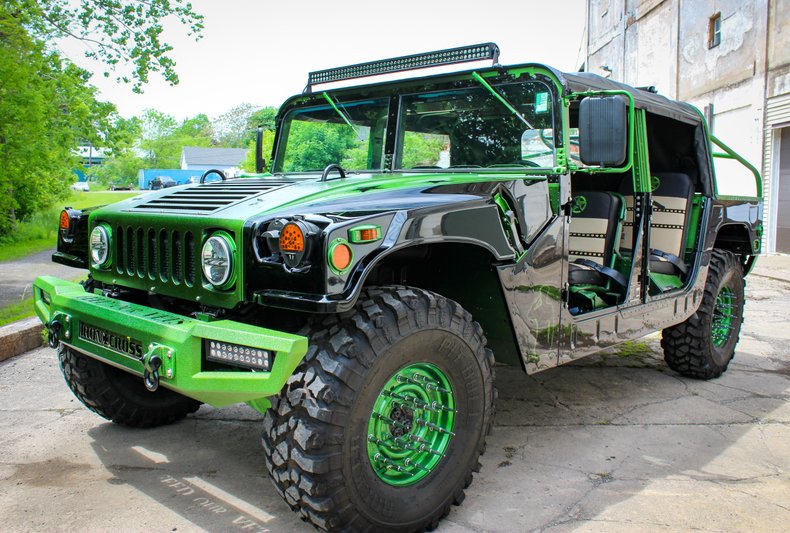 A dramatically customized 1990 military High Mobility Multipurpose Wheeled Vehicle, more famously known as a Humvee or HUMMER H1.
This is not just any used Humvee, this vehicle was subject to a complete, frame off, rotisserie customization by nationally recognized restoration and hot rod specialist Steve Hale of Frankfort, N.Y. The Humvee's unique paint and features is a salute to America's veterans and a fund raising effort for "Feed Our Vets" which is the only national non profit supporting vets nationally and in upstate New York with meals and food pantries.

The M998 HMMWV was developed by the military as a replacement for the Jeeps used in Vietnam. First produced by AM General in 1984 more than 281,000 of these tough and reliable light utility vehicles first gained fame in Desert Storm and later in the Iraq and Afghanistan wars. Military forces all over the world have ordered these workhorse vehicles.

The idea for this special salute to veterans originated with a Utica based charity called "Feed Our Vets", a 501 c 3 charity. That organization provides meals and operates several food pantries including a mobile food pantry-serving veterans in central and eastern New York State. Percentage Proceeds from sale of this Humvee will go to Feed Our Vets, a 501(3) to help maintain their programs. Feed Our Vets founder Rich Synek says he first had the idea of finding a Humvee to help raise funds for his group after CNN restored a H1 Hummer they had used in the Iraq war and auctioned it off for $1.25 million to benefit the Fisher House Foundation.
In 2015 Synek set off to see if he could find someone to donate a Humvee and last year he received a 1990 AM General HMMWV from Robbins Air Force Base in Georgia. He contacted Steve Hale of Steve's Hot Rods and Restorations. Steve is well known from appearances on the History Channel's "American Restorations" program. He jumped on the project when Synek showed him the Humvee.
Now, one year later and after at least 1,000 man-hours of labor the "Feed Our Vets" project has been completed. " Every piece was dismantled in Steve' shop, cleaned and painted.

The original 6.2-liter GM diesel V8 engine with GM fuel injection was freshened and runs well. The transmission is a 3-speed automatic and features independent 4-wheel drive. The suspension has been rebuilt. With four doors and a wide wheelbase there is plenty of room in the interior, which has also been completely redone in keeping with the look of the vehicle. All the gauges have been replaced.
The stunning and one off green and black paint scheme uses paint specially formulated and donated by PPG from their Crystallance paints which uses crushed glass to provide a striking sparkle. A&P Master Images of Utica donated computer renderings of the vehicle for the customization process. The vehicles features touches like 13 stars painted on the hood along with saluting soldiers on the truck's sides. The "Feed Our Vets" front and rear bumpers were donated by "Iron Cross" bumpers. The rear roll bar featuring a military star is part of the design and is hand rolled fabricated steel.
The huge tires are 37X12,5R16.5 donated by Pitbull Tires. One of the most memorable features of this special Humvee is the green wheels featuring chrome studs.

Completing the package are special LED lights across the front and rear windows and around the front fenders. Westin Automotive Products donated them.
Special Thanks and Kudos to Steve Hale! We can see the attention to detail he and his crew of Steve's Restorations & Hot Rods has put into this AMAZING Machine that is nothing short of Incredible! Well into the Six-Figure Range spent on it.