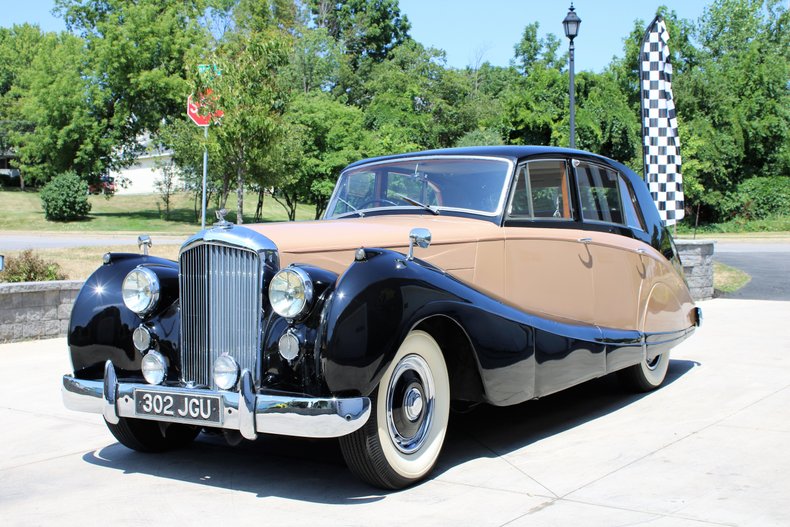 The Epitome of Luxury!
Coach by Freestone Webb!
All Aluminum Body Bentley!
Original Car with no modifications and an older restoration that has lasted very well.
These cars were owned by the Very Wealthy of the Era and still draws many Ooooh's and Aaaah's.
The R-Type was an improvement on Bentley's popular MK VI standard saloon, and was produced from 1952 until 1955. It has an elongated trunk which allowed for more sweeping lines.
Very Rare Indeed!
CHASSIS NUMBER 'B101 UL'
Though the Bentley was so expensive and coveted they managed to produce 2500 units.
ONLY 295 OF THEM WERE 'COACH BUILT BODIES'
Most of them being left hand drives.
OUR EXAMPLE IS AN EARLY BUILT '101' AND A RIGHT HAND DRIVE!
THIS GENERATION 'R-TYPE' REMAINS THE LAST OF THE BENTLEYS TO BE SOLD WITH A MANUAL TRANSMISSION.
Beautiful Car with the Ever Appealing Sweeping Lines and Oh, those Fenders and Headlights!
Gorgeous!
Very few R-Types were Freestone & Webb! Enjoy this Bentley and Watch your Investment Grow!
While approximately 80% of R-Type production were delivered with steel saloon bodies, just over 300 examples left the factory in bare chassis form. Around thirty are believed to have been bodied by Northwest London coachbuilder Freestone & Webb, with this example rendered in aluminum coachwork. The Black and Tan finish shows well
This Car has Full Leather Interior
Push Button Start
Rear Convenience Trays
It's Original Tire Tools
Simply Magnificent!
During development it was referred to as the Bentley Mark VII; the chassis cards for these cars describe them as Bentley 7. The R Type name which is now usually applied stems from chassis series RT. The front of the saloon model was identical to the Mark VI, but the boot (trunk) was almost doubled in capacity.[citation needed] The engine displacement was approximately 4½ litres, as fitted to later versions of the Mark VI. An automatic choke was fitted to the R-type's carburettor. The attachment of the rear springs to the chassis was altered in detail between the Mark VI and the R Type.
For buyers looking for a more distinctive car, a decreasing number had custom coachwork available from the dwindling number of UK coachbuilders. These ranged from the grand flowing lines of Freestone and Webb's conservative, almost prewar shapes, to the practical conversions of Harold Radford which including a clamshell style tailgate and folding rear seats.
All R Type models use an iron-block/aluminium-head straight-six engine fed by twin SU Type H6 carburettors.[citation needed] The basic engine displaced 4,566 cc (278.6 cu in) with a 92 mm (3.62 in) bore and 114.3 mm (4.50 in) stroke. A four-speed manual transmission was standard with a four-speed automatic option becoming standard on later cars.