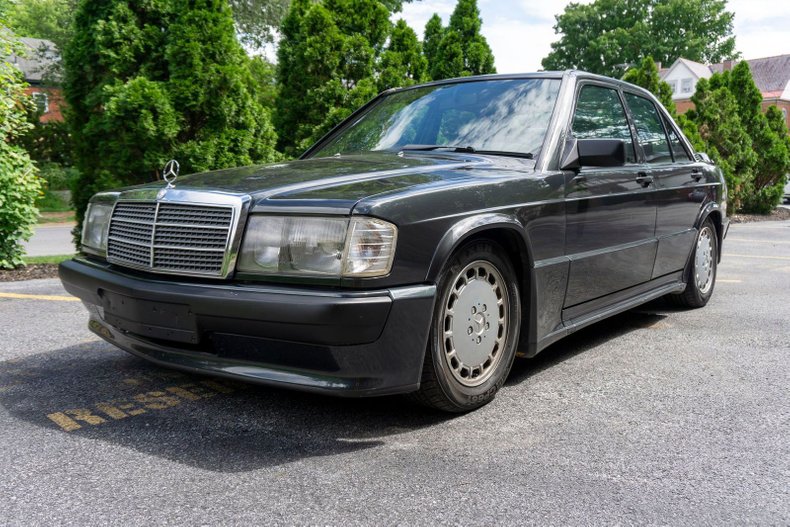 On the surface this Mercedes Benz looks like a solid example of a 4-door family sedan from the mid-80s but look closer, this is actually a rare German hot rod. The only clue is that not so subtle rear wing.

While the Mercedes line of elegant simple 190 sedans sold extremely well around the world with a number of different engines it was seen as an economical family car. Then Mercedes decided they wanted a new car to compete in the world rally championship replacing the 450SLC they had been using.

With its low drag body design the 190 was a perfect fit. But it needed a better engine to race at that level and they turned to famous English engine firm Cosworth. Cosworth designed a 16 valve head for the 2.3 liter high strung 4 cylinder that produces 185 horsepower in street spec and some 320-horsepower in race trim. This is a European spec car which means it will have better performance than the less powerful US imports.

Mercedes pulled the plug on the rally car project when Audi introduced the Quattro which went on to dominate international rally competition. With an excellent engine and well-developed chassis Mercedes decided to enter the DTM series, that's the intensely competitive racing series that features sedans from all the major German car makers. Racing in the DTM meant that the company had to “homologate” the 190E with a production road version to quality it as a “production”car. It was the success of the 190E in DTM that directly led to the BMW M3 and touched off a whole series of German production performance sedans that continues today.

This particular car has had a series of mechanical upgrades with the upper engine refreshed including new valves, also a new water pump and a new clutch. A new stereo radio has just been installed.

This car is painted in a Metallic Charcoal Gray with a gray/plaid interior featuring bucket style seats with leather trim both front and back. There is also a sunroof.

The Mercedes Benz 190 series is beginning to find favor with collectors and with the special E performance package from Europe this car is rare and collectable.