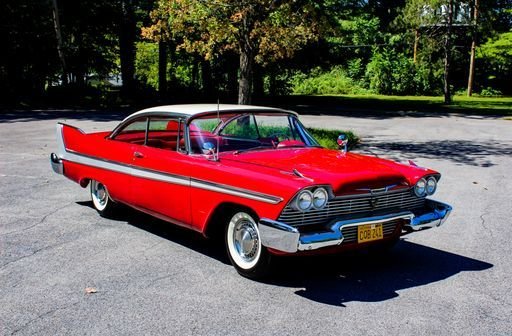 This car is evil. It is also a movie star. That's right, it is an actual survivor of the cult horror classic “Christine.” This is not a replica, a reproduction or a clone, it is the real deal. With documentation, this is apparently the only genuine survivor of the most scariest automotive movies ever made.

In filming “Christine” Director John Carpenter used some sixteen 1958 Plymouth Furys and additional Plymouths of different models but all painted red. They were crushed, crashed and set on fire. Not many survived intact. This car is one that actually lived on in good condition. It was used in closeups.

After filming wrapped three “Christines” were sent on the road to promote the film. This car was raffled off after her movie career was over in a promotion with the USA cable network's “Night Flight”. Some 40-thousand people entered the sweepstakes. The car was won by a Scott Edminster. It eventually wound up in amazing company as part of the Ron Pratte Collection in Arizona. This was a sizeable collection of memorable cars, just about all American, including famous vehicles like the GM Futureliner bus, the last Shelby Super Snake Cobra and the 1954 Pontiac Bonneville concept car.

After a 2015 Barrett-Jackson auction, which dispersed the Pratte Collection, “Christine” came to the Rochester Auto Museum. In 2018 she took a star turn, featured in a 35th anniversary celebration of the movie at the museum which included cast and crew from the making of the film.

This Plymouth Fury is “Christine,” and it comes with full documentation including an ownership title for Polar Films which produced the movie.

She has undergone an all-inclusive restoration and is powered by a small block Wedge V8 motor. Dual 4-barrell carburetors sit on an Offenhauser intake manifold. The TorqueFlite automatic transmission features those memorable push buttons mounted on the dash. She also features power steering and power brakes.

The exterior of “Christine” is in the original red with white top and features reasonably sized fins in keeping with 50's styling. Body trim is chrome and polished aluminum. Full size wheel covers are used over the wide, white wall tires. The interior is two tone red vinyl and cloth bench seats with red carpeting.

The radio played a key and scary role in the movie, coming back to life after being destroyed by a punk. One doubts that this is the original AM radio, but it may well be “Christine's Voice.”

“Christine” author Stephen King picked the 1958 Plymouth Fury as the protagonist for his book because he felt it was a forgotten car. Somehow the thin roofline, opulent trim, quad headlights and straight bar grill, so well received and much copied in the 1950s, were out of favor by the 80's. It certainly isn't surprising that after the success of King's book and the movie adaptation, the Fury is no longer an overlooked Plymouth. They are now highly collectable and there are a number of nicely done clones and reproductions out there of this movie star, but they aren't the real thing.