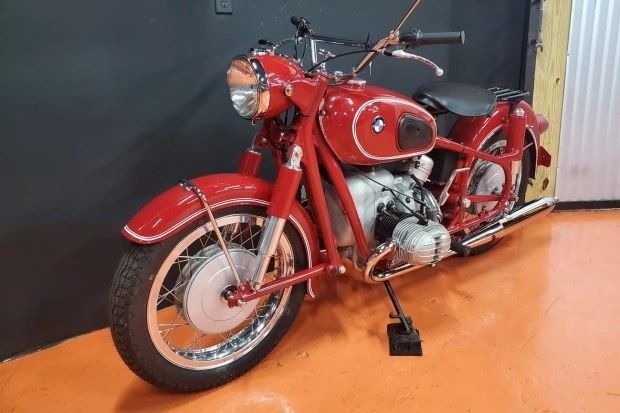 This 1969 BMW R60/2 is powered by a triple numbers-matching 594cc opposed twin paired with a four-speed transmission and finished in red with white pinstriping. It was produced in 1967 but title states it is a 1969. Equipment includes an Earles fork, a Denfeld solo saddle, stainless steel mufflers, a chrome handlebar with a center cross-brace, Akront rims, and a locking fuel tank storage compartment.

The bike underwent a refurbishment by the late John Swift of Alabama that was completed September 2020 and included paintwork, an engine overhaul, and speedometer repairs. The “sister” of this one, in black was also made by John Swift and sold for a World Record Price of $35.5000 plus 5% on BaT, January 2021. This R60/2 is offered with a tool kit, an onboard tire pump, an owner's manual, a BMW shop rag, and a clean Oklahoma title.

Wire wheels feature chrome spokes and polished 18″ Akront shouldered aluminum rims, and are mounted with IRC Grand High Speed Tires. Suspension consists of an Earles fork as well as dual shocks mounted to the swingarm. Braking is from drums at both ends.

The 594cc opposed twin was factory-rated at 30 horsepower, and work carried out under previous ownership reportedly consisted of refurbishing the crankshaft and replacing the pistons and rings as well as cylinder head overhauls. Power is sent to the rear wheel through a four-speed transmission and an enclosed driveshaft.

The headstock plate indicates an R60 with serial number 1812555, which matches the stampings on both the frame and engine case shown in the gallery.

The tool roll stows in a locking compartment on the left side of the bike along with a BMW-branded shop rag.

This bimmer is in mint, showroom condition.