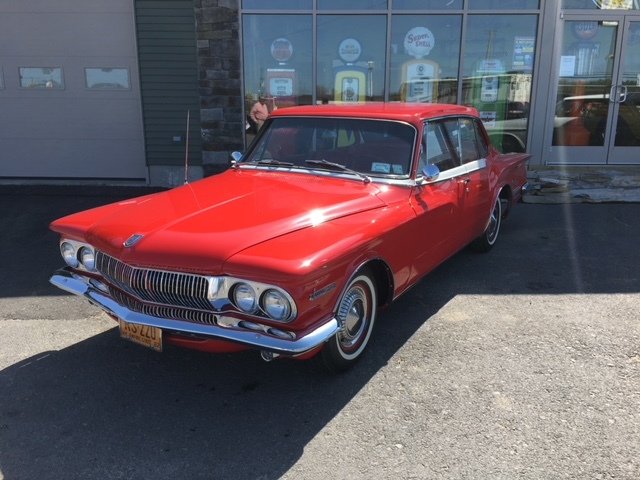 In America, during the late 1950's, it became clear that bigger being better was not always the way to go. The late 50's recession put a huge dent into what had been a booming car industry. American Motors with their smaller more economical cars had one of its best years. Also, those funny looking foreign cars were a hit with college kids. Detroit decides this is a market to explore.

While GM jumped in with both feet and spent millions on the Corvair, Ford and Chrysler decided to build scaled down versions of big cars. Ford gave us the Falcon and Chrysler, first, the Plymouth Valiant and later the Dodge Lancer.

In 1960 the Valiant was a huge, out of the box, success but, hedging their bets, Chrysler didn't build a car for Dodge. Dodge dealers demanded their own low end small car and so was born the Lancer.

We are offering a very handsome very red, only repainted once, 1962 Dodge Lancer Model 742 GT 2-door coupe. Being aimed at a more upscale clientele than a Valiant, the Lancer was a much more fully appointed car. It has power steering, a radio, the A 904 3speed automatic with push buttons and powered by the evergreen 225 cu in 145 hp classic Slant-6.

This would be a brilliant choice for your first collector car.