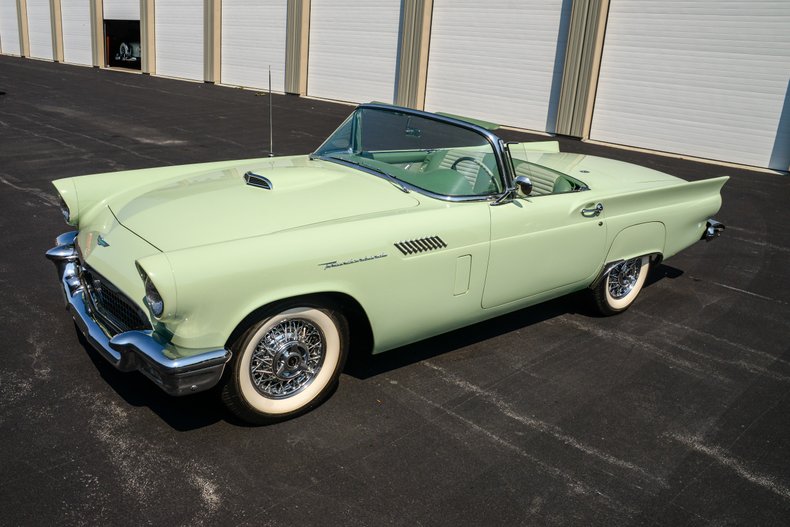 Ford introduced the Thunderbird in response to General Motor's Corvette after it was shown at the 1953 Motorama exhibit at the New York Auto Show. Both cars were intended to compete with the new European sports cars now entering the U.S. such as Jaguars, MGs and Austin Healeys.

Called a “personal car” by Ford the two seat Thunderbird evolved more as a personal luxury car than the Corvette which aspired to be creditable as a performance-oriented sports car so the T-bird focused on comfort rather than speed.

The last year of the two seat Thunderbird came in 1957 with that year seen by collectors as the best of the “baby birds.” In this model year the larger rear fins featured a subtle curve, larger tail lights and the front bumper was redesigned to provide a larger grill. The spare tire was moved back into the trunk doing away with the awkward looking continental kit.

This car is in rare Willow Green with green and white upholstery and includes a green detachable hard top as well as a convertible top. Fender skitrs cover the rear wheels which helps further smooth the lines of the car.

As a D-code car this T-bird has the optional 312 cu. in. V8 with the Fordomatic automatic transmission. So, while the Thunderbird is not seen as a real sports car it could still hit 110mph.

After the 1957 model Thunderbirds became luxury four seaters and lost any pretense of being a sports car.

Today, often seen as one of the best U.S. automotive designs of all time, the 1957 Thunderbird has proven highly collectable.