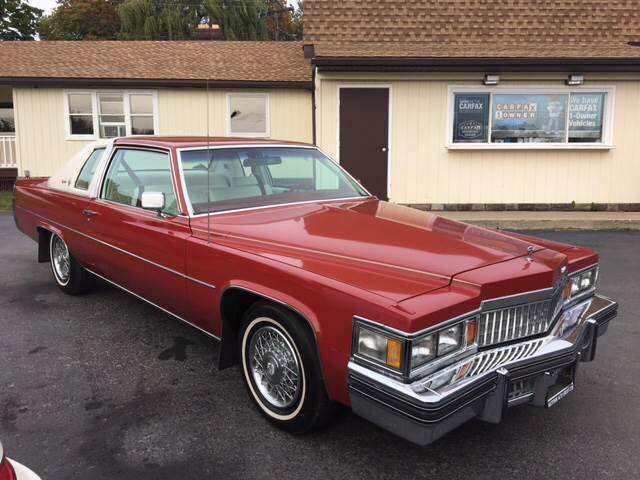 Cadillac's de Ville series of coupes and sedans have always represented the highest levels of performance and luxury. Introduced during the 1949 Motorama tour and until Cadillac retired the model in 2005, the de Ville was the status symbol most coveted by the entrepreneurs and social climbers of post World War 2 America.
We are offering for auction and excellent example of the fifth generation of the DeVille line produced in 1978. The fifth generation was introduced in 1977 to celebrate the 75th anniversary of Cadillac. The new DeVille was nine inches shorter and four inches narrower. The reduction made the new DeVille a ½ ton lighter. Despite the reduction in size, the new DeVille had a larger trunk with more head and leg room.
Our 1978 fifth generation DeVille has only traveled 4,700 powered by a 5.7 liter V8. The most striking feature is the “Cabriolet” roof option. With this option, the rear half of the roof would be of padded vinyl with opera windows and lamps. The color would often match the interior. In this case a white leather interior with red highlights. The red high lights would be the same red as the exterior.
It is a strikingly handsome automobile that exudes the class that is Cadillac's hall mark and best express by the DeVille.