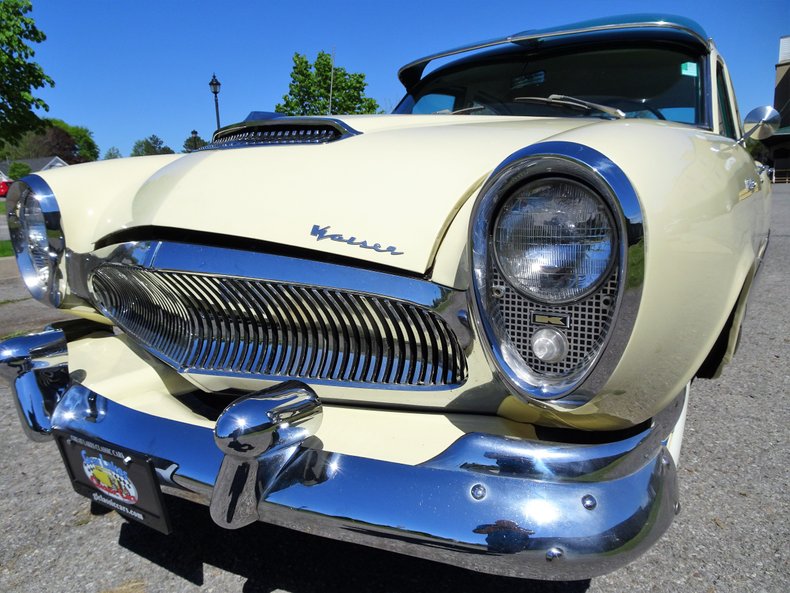 1954 Kaiser Manhattan SC
Supercharged Sedan
Loads of Art Deco adorns the overall styling of this cherished and Museum Quality vehicle.
Opulence in design and stature
Yes, literally a Museum is where this Kaiser has been for over the past decade.
We acquired this beauty from an incredible museum collection where it has been admired for years.
A full nut-n-bolt restoration is evident and brought the quality of this piece of Automotive History to above par on this original low mileage Kaiser.
We have the documented restoration in a photo book as well as owner's manuals and service book.
No disappointments!!!
Henry J Kaisers venture into automobile manufacturing has been well documented, and consequently is not covered in detail here, instead I'll just concentrate on the aspects of the Kaiser history which resulted in the eventual pioneering adoption of the McCulloch Supercharger.
Henry J Kaiser formed the Kaiser-Frazer Corporation in 1945, in conjunction with Joe Frazer of Graham-Paige, with the purpose of producing “the peoples car”, a cheap, light vehicle that everyone could afford. Economics of the time, as always, dictated otherwise and the resultant vehicles (Kaiser and Frazer) were priced in the medium price bracket along with Desoto, Oldsmobile and Buick, however the cars sold as the car starved public were practically buying anything. The cars that Kaiser produced were austere in appearance and innovative for the time, featuring passenger seating between the axles, a wide interior and full flow ventilation, however economies forced the use of conventional rear wheel drive instead of the originally envisaged front wheel drive. Engine power was provided by the 226 cid Continental six L head engine, which was originally designed for industrial use.
The first Manhattan (actually a Frazer and not a Kaiser) was produced in 1947 and this was innovative in that it was produced with a color-coordinated interior, a first for the time. Kaiser was also considering a V-8, and in fact had designed one in 1946, but tooling expenses were prohibitive, and Kaiser instead approached other manufacturers, having little success. Faced with the choice of going with the V-8, or having another attempt at his peoples car, Henry J Kaiser chose the latter, a decision which it is believed led to the eventual downfall of Kaiser, and the use of the McCulloch Supercharger.
The resultant peoples car, the Henry J (also marketed as the Allstate by Sears) , was produced in 1951 however the styling of the car was not to public taste, and sales were poor as a result. To reduce costs the Henry J had no trunk lid, no glove box and no ventilation system. Kaisers low volume production resulting in the pricing to be just below the Chevrolet, and this coupled with the fact that it was a plain car introduced when the public were craving for more chrome, contributed to the poor acceptance of the Henry J. At this time Kaiser had split with Frazer (dropping the Frazer range) and coupled with Willys, and the Henry J's were powered by either a Willy's 134 cid four or 161 cid six cylinder L head engine. In contrast to the Henry J, the 226 cid L head Kaiser which had been restyled by Howard 'Dutch' Darrin was very well received, particularly with regards to its attractive looks.
In 1953 Kaiser merged with Willys, and was by then in trouble, probably due to the poor Henry J sales. The 1953 Kaiser was however still a unique and attractive car, particularly in Manhattan form (reintroduced in 1952), but the lack of V-8 was making it a poor competitor when compared to other marques. Despite his troubles Kaiser courageously introduced the Dutch Darrin designed Kaiser Darrin in 1954, an expensive fiberglass bodied two seater sports car powered by the Willys 161 cid six cylinder F head engine. This also suffered poor sales further contributing towards Kaisers financial problems.
For 1954 Kaiser addressed the power problems of the Kaiser and it's possible impact on sales by utilizing the McCulloch VS57 Supercharger.