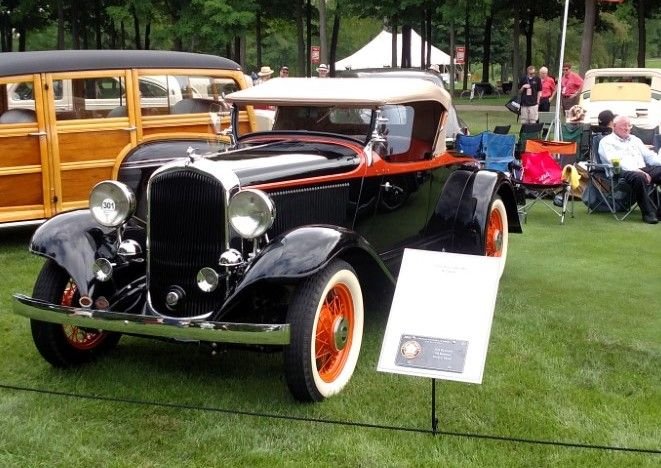 PB ROADSTER
Joseph Frazer, a Chrysler executive who was later a partner in the Kaiser-Frazer Corporation, selected the Plymouth name. He named the car after the Plymouth Cordage Company that at the time, produced twine. He chose the name since twine was a popular product with farmers. Due to the Great Depression, 1932 was the lowest auto sales year since 1918. In spite of this, Plymouth increased its market share significantly and was the third most popular car in 1932.

There were ten different Plymouth models offered in 1932. The Businessman's Roadster cost $495 and 3,225 were sold of a total production run of 121,468. New for this year were the one piece front fenders, free standing chrome headlamps and an improved four cylinder engine. It generated 65 horsepower from 165 cubic inches. This was also the first year for a rigid "X" frame and oil filters became standard equipment. Brake drums were now fitted with centrifuse. This was a steel drum with a fused cast iron friction surface.

This car is one of 320 "Collegiate Special" models built in 1932. The black and orange colors represent Princeton University and it was a $40 factory option. This model is one known to be built as a Businessman's Roadster featuring these eye catching colors.