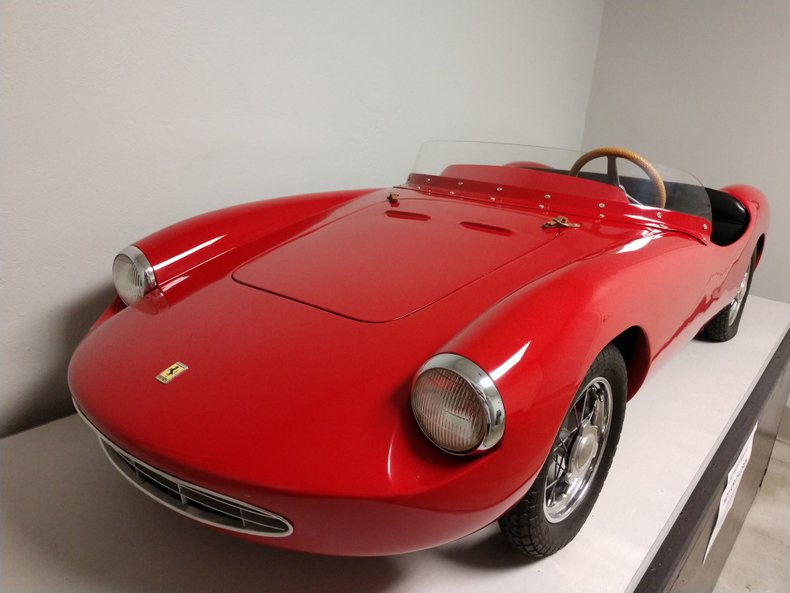 1962 Letizia Ferrarina 0.3 P.T.
This children's electric car was imported into the United States
in 1962 by Luigi Chinetti Motors, the sole importer and distributor of Ferrari Automobiles for all of North America. It was displayed in Chinettis' New York City showroom and later in the Greenwich, CT showroom. In the early 1970's Luigi Chinetti gave it to his friend Gerry Martin, the Vice President and General Manager of the New York International Automobile Show. It was used by Gerry's 2 daughters and then Gerry lent it to his brother-in-law in Mass. In the late 1970's Gerry gave it to me. It needed a complete restoration which was done at Amerispec Corp. in Danbury, CT. It was driven by my daughter and then displayed for many years in the showroom of Amerispec. In 1980 it was shown at the Ferrari Club of America National Meet in Washington D.C. To transport it to the meet a wooden travel box was made which fit into the back of a Ford station wagon. The car is held on a wooden fabric covered platform which when removed is placed on top of the wooden box for display purposes.
In April 2000 there was a featured 5 page article in Road & Track magazine on this car. The road test was done at Ralph Lauren's estate in Bedford, New York.
Since 2004 the car has been displayed at the Saratoga Automobile Museum and in May of 2017 my grand daughter Shayleigh Barrett drove the car at the museum just before it was shown at the Greenwich Concours.
It is one of the most famous children's cars in the world!