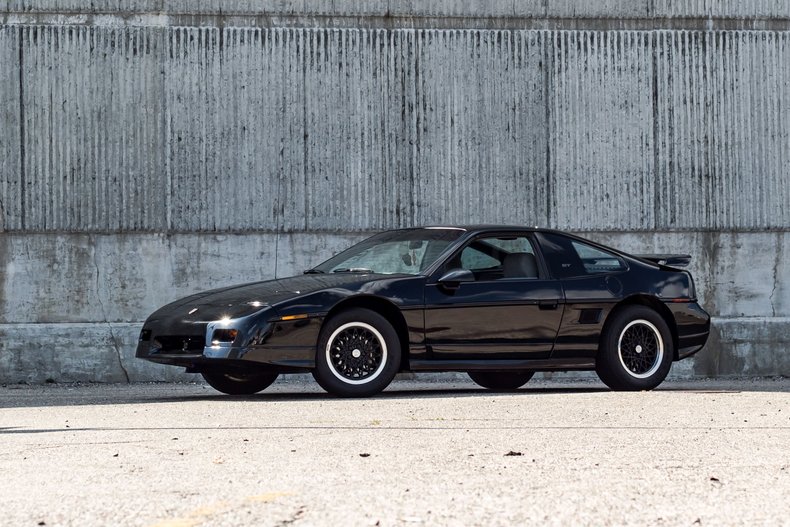 1988 PONTIAC FIERO GT
The Overview
As it was originally conceived, the Pontiac Fiero was always meant to be a small two-seater sports car with a V6 engine and unique new suspension setup. However, due to the impending oil crisis of the early '80s, the accountants decided that instead of utilizing new designs for everything that they would save money by making the Fiero a parts bin special. When it was released for the 1984 model year it received modest praise, but the cobbled together suspension and anemic “iron duke” 4 cylinder engine left reviewer and buyers alike lamenting the decisions of the bean counters. Although the Fiero received the option of a V6 engine as early as 1985, it wasn't until 1988 that the car finally reached the full potential the original designers had hoped for. With the release of the 1988 model, the Fiero finally got the suspension setup that the designers had drawn up in the early 1980s. In addition to this, it received vented disk brakes and staggered wheels for improved handling balance. These improvements mean that the 1988 model year is the most sought after. Approximately 15,880 Fiero GTs were produced for 1988, most of which have been turned into Ferrari 308 replicas. 1988 was the final year for the production of the Fiero and the last unit rolled of the assembly line in Pontiac, Michigan on August 16, 1988. While the Fiero often does not get the love it deserves, it was a truly groundbreaking car for GM to produce. It is many people's opinions that if the company had followed the guidance of the designers instead of the accountants from the beginning that the Fiero would be held in much higher regard than it is today. The formula of the Fiero is undeniably cool, a mid-mounted V6 engine, a short wheelbase fitted with a proper suspension setup and the fact that it came from an American car maker in the '80s is truly outstanding.
The example on offer here, chassis number 1G2PG1190JP221785, is a 1988 Pontiac Fiero GT fitted with a desirable 5-speed manual transmission and finished in Black exterior with Grey cloth interior. This particular Fiero is outstandingly original and has only 15,172 miles on the odometer from new. It is believed to be mostly original paint as well as all original interior. The early history on this car is not fully known but according to the provided clean CarFax, it appears that the current owner has owned the car since at least 2007 and since in their possession it has been driven sparingly, serviced when needed, and stored in their climate-controlled garage. As it sits today this Fiero needs nothing and is a stellar example of GM's foray into the mid-engine sports car world.
Included with the sale of this car are the books, receipts, original spare and jack, and a copy of the original loan document from the initial sale of the car.