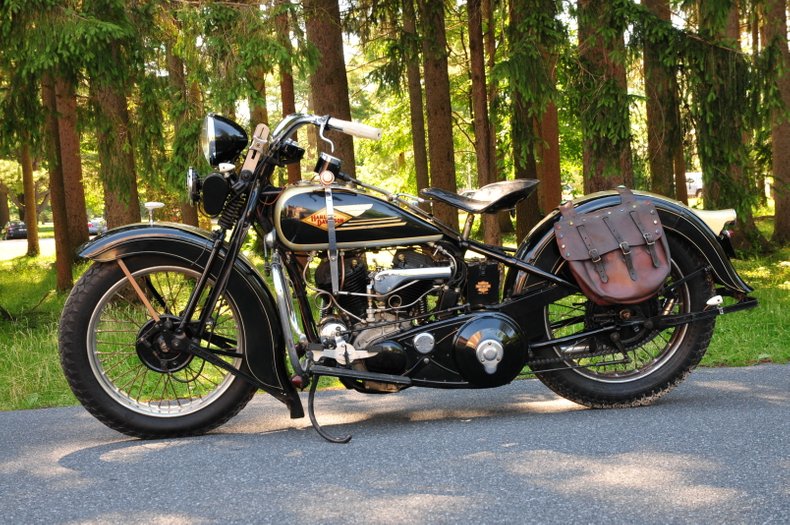 Harley-Davidson, of Milwaukee, Wisconsin, began producing motorcycles in the first decade of the 20th century. Production began with three motorcycles in 1905 and rose to 1100 by 1909. The company produced 20,000 motorcycles for the army in World War I, and by the 1920s, yearly production was in the 20-28,000 range, with exports to 60 countries around the world.

The crash of 1929 and the resulting world-wide economic depression was a catastrophe for Harley-Davidson. By 1933, the company was on a two-day work week and total yearly production was less than 4000 motorcycles. A drastic change was needed to save the company from failure and that change was the new, for 1934, VL model.

The new VL series was powered by a brand new “Big Twin” – this was a “Powerful Dynamic TNT Motor” of 74 cubic inch that produced 36 bhp & 4600 rpm. It reverted to a side-valve engine design for ease of construction, simpler maintenance, and improved reliability. This new engine was installed in a frame with traditional, for the era, suspension, but the other significant change was in the appearance of the VL line, which took its inspiration from the Art Deco movement of the time.

The new VL models featured “air-flo” styling with “magnificent colors in numerous combinations” all melded together to produce a “spic and span, trim and modern” motorcycle. But the new engine, with modern styling and Harley's “Pay-As-You-Ride” finance plans, and the new model was a sales success, with approximately 7500 produced in 1934.

This motorcycle's original owner was Francis Romaine – apparently, he was a man with a great deal of mechanical skills. He had his own workshop and took very good care of his Harley. Upon his death, his aunt cleaned out his house and sold the motorcycle to its current owner in 1978 in a partially disassembled, but complete condition. Realizing the reassembly was beyond his capabilities, the new owner stored the cycle for the next few years. Sometimes it was in the spare bedroom of a friend's house (apparently a very understanding friend!) until the present owner acquired a house with a garage. Now the motorcycle had a place of its own where it was carefully parked and covered with blankets. And there it sat – aside from the few times when the blankets were removed and the owner imagined it rebuilt and running, its odometer moving again past the 7897 miles that were on it.

Recently, a suitable expert was found; the cycle was uncovered and taken to the restoration shop for an evaluation of its condition. The results were hard to believe: the original factory-custom two-tone paint was in fine condition as were all the original factory decals and tags.
Also present were the original factory exhaust and air cleaner (very rare), original Harley windshield/fairing, and saddlebags. The seat and pedals were also apparently original. Surprisingly, it appeared the tires are the originals as well.

Mechanically, the clutch and transmission were in excellent condition, and upon examination, the cylinder barrels needed only a light hone, not a rebore. In examining the pistons (which are a split-ring design), it was determined that the motorcycle was most likely built in the first six months of VLD production.

Included with the cycle are various paper materials, including registration, a letter from Harley-Davidson to the original owner, and a 1934 sales brochure. There are also some miscellaneous vintage parts in their original boxes.

In the collector vehicle market, a fairly recent trend is what is known as Preservation vehicles. These are sometimes referred to as “Barn Find” cars, but there is a difference – barn find vehicles can be, and frequently are, derelict, abandoned, and decrepit. They can be resurrected and made mobile, but they will still retain the well-worn, neglected, and shabby paint, chrome, and interior that they were found with.

This motorcycle, on the other hand, is an outstanding example of a preserved vehicle. The winning bidder will have a difficult decision – keep it as it is or take it for a ride for the first time in over 60 years. Either way, it will be a fine example to add to a serious collection.