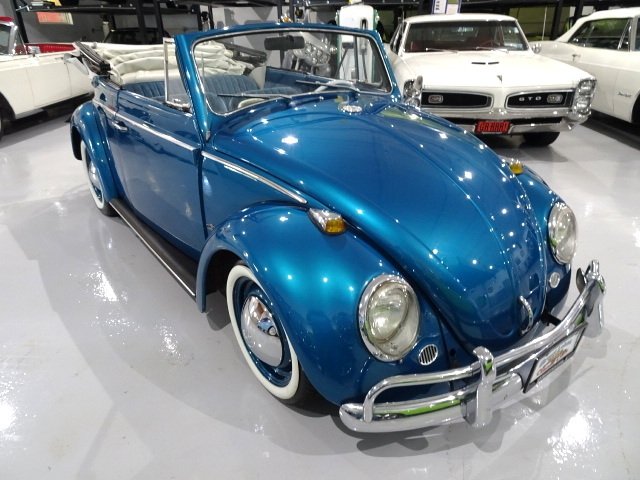 The most ICONIC and RECOGNIZABLE body style of all time !

Endearingly identified as "THE BUG" The Volkswagon BEETLE stands alone as recognizable.

For a car that had a rather odious beginning as a people's car commissioned by Adolf Hitler, the Beetle came to be loved by multiple generations of basic transportation seekers on every continent.

The 1960 “Think Small” advertising campaign is still studied in marketing classes around the world. Throughout most of its life in the U.S., the Beetle was offered in sedan and cabriolet body styles. Pre-1968 Beetles were inexpensive but never cheap. They were well-assembled, used first-rate interior materials and have a charm that's lacking in later cars. Just about every part for a Beetle is readily available and most are quite inexpensive
.
OUR BEETLE :
Now painted in an eye catching Teal Blue metallic and a White convertible top, all in very good condition, draws looks and questions wherever you might be. The wheels are also color coded with chrome center caps and good rubber with wide whitewalls that ad to the fun look. The 1200cc motor has also been trimmed to match the exterior color having only 1500 miles since mechanical restoration. The bugs headlights are clear and the chrome trim rings unblemished with both bumpers in very good order. The Inside metal trim is again color matched complimented with blue cloth seats and door trim in excellent condition. Ivory accents are used (knobs,arm rests and trim rings) to set off this really nice interior.

This is a really nice vehicle representing the iconic "BEETLE' It is fun to drive top up or down.
Please note Titled with Colorado Reassignment VIN